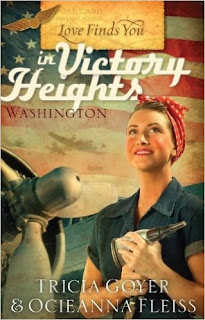 The Second World War has stolen Rosalie's fiance from her. But rather than wallow, Rosalie throws herself into her work at the Boeing plant in Victory Heights, shooting rivets into the B-17 bombers that will destroy the enemy. A local reporter dubs her Seattle's Own Rosie the Riveter, and her story lends inspiration to women across the country. While Rosalie's strong arms can bear the weight of this new responsibility, her heart cannot handle the intense feelings that begin to surface for Kenny, the handsome reporter. Fear of a second heartbreak is a powerful opponent - but will it claim victory over love?

I’ve steered clear of the Love Finds You series for a long time. I can’t put my finger on what it is but something about the books told me to look elsewhere in my literary wanderings. Still, I am a WWII nut and the subject matter of this particular title proved a real temptation. My resistance crumbled entirely when Love Finds You in Victory Heights, Washington turned up as a kindle freebie. No offense to the authors or fans but next time around I hope I listen to my gut. I prefer grittier storytelling and this was just too sugar coated for my taste.

I had a real problem with Rosalie’s lack of emotion in the face of loss. Her grief over her fiancé’s death should have been palpable but for me it read only lukewarm. Additionally, I couldn’t give weight to Rosalie’s ‘fear of a second heartbreak’ when her first was never properly developed. What grief she experienced seemed to stem more from her own inadequacy and guilt than any real affection. Her belief that marrying Vic would have been a mistake further undermined the authenticity of her emotions and went a long way in minimizing the internal conflict touted so prominently in the book description.

Emotional depth wasn’t the only thing I noted as lacking. I also felt a distinct absence of creativity throughout the book but nowhere is it more obvious than with our leading lady. Christening the rivet wielding heroine Rosalie was as uninspired as Kenny’s exploitation of the Rosie the Riveter comparison in the newspaper. Thank you Captain Obvious. Is it really any wonder his boss wouldn’t give him a hard story? His breakthrough piece was half written in the American psyche before he even touched pen to paper. It might work for other readers but this was just too cutesy for me to get into.

One thing I did appreciate was the attention to detail. The story and writing style weren’t for me but there was an obvious amount of effort put into recreating war era America. The lingo, the pastimes, the prejudice experienced by women in the work place, all of it speaks volumes about the ladies who put Victory Heights together. The end result didn’t hold much water with me but even so, I applaud the effort that went into writing it.

Before descending my soapbox I want to note an observation not of the book itself but of some the other reviews. Many of those who issued lower ratings cite surprise over religious themes as the cause. With all due respect I can’t give these reviewers a lot of credit. I realize the blurb doesn’t hint at the inspirational content but that is the case with a lot of religious fiction. If you don’t appreciate the subject matter, take time to learn how to recognize it so you know what to avoid. That sounds harsher than I mean it to but there are plenty of indicators if you know where to look.

Both Amazon and Goodreads classify the novel as religion based entertainment. Summerside Press bills itself as “an inspirational publisher offering fresh, irresistible Christian fiction” on their website and in the publication information of the book itself. Tricia Goyer’s website and author bio states she was named ‘Writer of the Year’ at the Mount Hermon Christian Writer’s Conference in 2003. According to her author bio, Ocieanna Fleiss contributes to a bi-monthly column in the Northwest Christian Author. The Love Finds You series “features real towns and combines travel, romance, and faith in one irresistible package” per the series information in the back of the book. The copyright segment clearly states that “unless otherwise noted, all Scripture quotations are from the Holy Bible, King James Version.” The acknowledgement section even provides a few clues as it thanks the Emmanuel Orthodox Presbyterian Church and Jesus Christ before concluding with “Not unto us, O Lord, not unto us, but unto they name give glory. Psalm 115:1.”

Before you ask the answer is no, I do not seek out Christian fiction. It is my affinity for historic fiction that leads me to many of these titles. I’m not particularly religious but the subject doesn’t bother me. All the same, I like to be aware that I am venturing into the realm of faith based lit. It might sound complicated but once you know where to look these titles are easy to identify. Don’t blame the book because you didn’t do your homework. If it really inhibits your enjoyment you will find that spending an extra two minutes to research a particular title is more than worth your time

All her life she never thought she'd love a man, not with the passionate commitment she loved Kenny with. And now, the one thing she dared not to dream of came to her like an unexpected gift.

I so wanted to read this based on the women mechanics alone..but now I am deleting it off my kindle. Ick.

I can understand the feeling. The religious themes are really heavy in this one. Too bad since the story sounded so promising.

I also decided I'm not a Goyer fan. This is the second of her books I have tried and I am still not impressed.