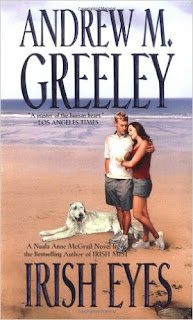 
Nuala Anne McGrail, that beautiful Irish spitfire, now lives in Chicago with her husband, Dermot, and their new baby, Nellliecoyne. As Nuala fans may suspect, Nelliecoyne is no ordinary baby: she is fey like her mother, and can see into the past as well as the future. Both Nuala and her daughter have had strange vibrations from a place on the lake where a shipload of Irish-Americans lost their lives a hundred years ago. In the course of their investigation, Nuala and Dermot make some dangerous enemies, and eventually have to solve a murder and find a buried treasure. Will Nuala survive the attacks of a sleazy DJ, and a dangerous run-in with the Balkan Mafia? And how does the diary of a young Irish woman at the turn of the century play into these events? Once again, Andrew M. Greeley--that master of the human heart--creates an engaging, charming story that will delight fans young and old.

Time it seems has changed my opinion of the Nuala Anne books. I read the first book of the series, Irish Gold, nearly ten years ago and greatly enjoyed it. So much so I immediately sought out the sequels. I devoured Irish Lace, Irish Whiskey, Irish Mist and Irish Eyes that same summer. I set the series aside to focus on my academic obligations but somehow didn’t find my way back to them until now. I decided to reread Irish Eyes to refresh my memory. Greeley tends to recap key information about the characters so I didn’t see much value in revisiting all five novels. No. Irish Eyes would be enough. Sadly, the book just wasn't as good as I remembered.


Why was I disenchanted my second go round? That’s a dumb question. The real query is where do I start. For one, Dermot is a push over and he knows it. He self-validates in every novel. It is annoying. Almost as annoying as his spending the entire book shaking his head and saying yes dear without complaint. I don’t find it appealing. I like a man with a little backbone, who has opinions and isn’t merely an extension of his spouse.


Nuala is perfection personified. She always has the answers, is always in the middle of things, never fails to be less than amazing and always looks fantastic doing it. People like her don’t exist. Real people have faults, real people make mistakes, real people have depth, complexity and baggage. Her flawlessness is exasperating.


Did I mention the couple has no real world worries or concerns? Dermot is a college drop-out who managed to make a pile of cash while working at the Exchange. His mistake allowed him to retire in his mid-twenties. He writes novels as a hobby more than anything else. Naturally the books are bestsellers. Nuala has an accounting degree but makes a living as a folksinger. Is anyone shocked that her records go platinum?


I don’t think I need to go into the fact that Dermot and Nuala’s daughter is a perfect replica of her mother (minus the red hair) and it goes without saying Nelliecoyne is intelligent and advanced for her age. No child of Coyne’s would dare be anything else less than impeccable. Gag me.


I think I’ve stated I don’t have a problem with sex in literature and for the record, I don’t think the intimacies in Irish Eyes would offend the casual reader. The problem is that I just didn’t find the scenes appealing. A man suckling his wife for breast milk just didn’t do it for me. I don’t mean to sound judgmental, some people might get hot and bothered by the idea but for me it was just awkward. Very awkward.


Having thoroughly stated why I dislike these books we come down to why I bother reading them. As always, it is the history. Greeley loves Chicago almost as much as he loves Ireland and her people. Reading his books is like entering a portal to times long forgotten. In Irish Eyes, we glimpse the booming shipping industry of the Great Lakes and harsh realities of life at the turn of the century with just a touch of Irish mysticism.


Greeley’s richly imagined storylines are also nothing to sneeze at. While vacationing, Nuala, Nelliecoyne and the Coyne's wolfhound, Fiona, pick up strange vibrations from a ship that sank off Grand Beach nearly one hundred years ago. In an effort to understand their latest physic episode, the Coyne’s start an investigation that leads them to a forgotten chapter of Chicago’s past, its connection with Ireland’s political struggles and the fate of the Ardagh Chalice. Meanwhile the couple is dealing with a media circus caused by the sensational accusations of DJ Nick Farmer. Nick’s unexpected death only complicates matters, more so as his fate seems to have ties to the Balkan mafia.


Will I read the rest of the series? Probably. Will I recommend to others? Not without a disclaimer. The books aren’t awful but they aren’t for everyone. I do want to make two further notes before I wrap up. Greeley is a Catholic priest. The books are not preachy in the least, I wouldn’t even call them religious fiction but I would avoid his work if religious concepts aren’t to your liking. The same concept applies to Republicans. I wouldn’t usually address the subject but every novel in the series seems to take a dig at conservatives. I find it annoying as I don’t appreciate party politics in fiction but I wouldn’t be surprised if these comments upset more political readers.

It wasn't the chalice, Nuala Anne. It was a winter storm that came too early, an old boat, and a dangerously irresponsible captain. Ellen's parents were young and romantic and convinced that they were immortal.

thanks for your honest review.