Margaret Beaufort: Mother of the Tudor Dynasty by Elizabeth Norton 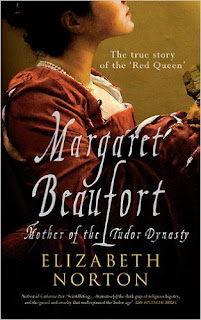 
Divorced at ten, a mother at thirteen & three times a widow. The extraordinary true story of the 'Red Queen', Lady Margaret Beaufort, matriarch of the Tudors. Born in the midst of the Wars of the Roses, Margaret Beaufort became the greatest heiress of her time. She survived a turbulent life, marrying four times and enduring imprisonment before passing her claim to the crown of England to her son, Henry VII, the first of the Tudor monarchs. Margaret's royal blood placed her on the fringes of the Lancastrian royal dynasty. After divorcing her first husband at the age of ten, she married the king's half-brother, Edmund Tudor, becoming a widow and bearing her only child, the future Henry VII, before her fourteenth birthday. Margaret was always passionately devoted to the interests of her son who claimed the throne through her. She embroiled herself in both treason and conspiracy as she sought to promote his claims, allying herself with the Yorkist Queen, Elizabeth Woodville, in an attempt to depose Richard III. She was imprisoned by Richard and her lands confiscated, but she continued to work on her son's behalf, ultimately persuading her fourth husband, the powerful Lord Stanley, to abandon the king in favour of Henry on the eve of the decisive Battle of Bosworth. It was Lord Stanley himself who placed the crown on Henry's head on the battlefield. Henry VII gave his mother unparalleled prominence during his reign. She established herself as an independent woman and ended her life as regent of England, ruling on behalf of her seventeen-year-old grandson, Henry VIII.

The thing I appreciate most about this book is that Norton doesn't try to recreate Margaret’s personality. She hints here and there but it is always based on Margaret’s own words or actions. For example, Norton covers the intense feelings Margaret had regarding the early marriage of her granddaughter but she doesn’t make assumptions about Margaret's emotions during her own early marriage to a man nearly twelve years her senior. It would be all too easy to say Margaret was a terrified bride, widow and mother by age thirteen but Norton resists temptation, restricting herself to the available facts and allowing the reader to come to their own conclusions. It is a style I personally appreciate as I like forming my own opinions rather than being told what to think, especially when it comes to nonfiction.


Factually this is a wonderful biography of Margaret Beaufort but it is a tough book to read. The spelling reverts to old English at random. Now I’m reasonably proficient in old English but I found myself stumbling more often than I care to admit. More than that, I found the formatting of the book difficult to absorb. Norton frequently starts a paragraph but follows her thoughts through years ahead of where she started only to backtrack again with the next paragraph. Again, I love that amount of information Norton compiled here but all the same, I found it hard to follow.


By and large I have few criticisms of the book beyond what I've already mentioned. Norton's work is wonderfully detailed in so much as the surviving records allow. Fact heavy but well researched. Recommended to fans of Elizabeth and Mary: Cousins, Rivals, Queens by Jane Dunn.

Fortune's Wheel was both kind and sometimes unkind to Margaret: the daughter of a probable suicide, the greatest heiress in England, divorced at ten, married to the King's half-brother at twelve, a widow at thirteen, a mother at thirteen, twice more a widow, a plotter, a prisoner, the mother of the king, most of all, Margaret Beaufort can be remembered as the mother of the great Tudor dynasty.

I listened to the audiobook of this. Rather good generally, especially for setting the record straight in terms of some of the bad press Margaret has recieved recently thanks to a certain Philippa Gregory novel.