The Guardian Duke: A Forgotten Castles Novel by Jamie Carie 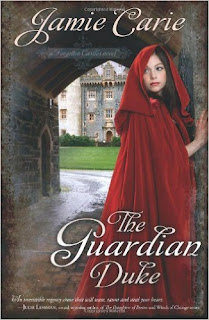 The Guardian Duke is award-winning novelist Jamie Carie’s most exciting story yet, a uniquely arranged Regency-era romantic adventure where hero and heroine know each other through written letters but have yet to meet. Gabriel, the Duke of St. Easton, is ordered by the King to take guardianship over Lady Alexandria Featherstone whose parents are presumed dead after failing to return from a high profile treasure hunt. But Alexandria ignores this royal reassignment, believing her parents are still alive and duly following clues that may lead to their whereabouts. Gabriel, pressured by what are actually the King’s ulterior motives, pursues her across windswept England and the rolling green hills of Ireland but is always one step behind. When they do meet, the search for earthly treasure will pale in comparison to what God has planned for both of them.

As an avid reader I hate admitting this but I am confused as to what this book was trying to do. There are many aspects to the novel but none of them felt fully developed. Half-baked is a wonderful way to go when you making chocolate cookies or eating Ben and Jerry’s but it doesn't work as well with literature.


Lady Alexandria, as a character, lacks cohesiveness. She doesn't know how to write a proper letter to a duke who she believes by definition must be old, monocled and suffering from gout but she has no difficulty leaving the only home she has ever known, travelling across the country, tracking the movements of her parents a year after their last correspondence or booking passage to Iceland? Either she is an inexperienced aristocrat who has no idea how to cope with life off her island or she a determined young woman who is more than capable of taking care of herself despite the conventions of the day. She can’t be both.


Alex’s motives also seemed inconsistent. She is so determined to find her parents that she defies the king’s wishes but she tarries in Belfast to watch Baylor compete in a local contest and is more than content to order fine clothes and attend the opera and a masked ball in Dublin? I’ll grant that she intended to seek out information at both Dublin events but she seemed to lose her drive and focus during her sojourn there. I was left questioning where the heroine was coming from.


Gabriel suffers from hearing loss mysteriously brought on when he is named guardian of the supposedly orphaned Alexandria Featherstone. The affliction plagues him the first half of the novel but disappears without mention when he leaves London. Naturally the condition reappears as he prepares to leave for Ireland which is why I am upset that there was so little attention paid to his momentary recovery. It is a good idea but the execution is sketchy. It needs to be all or nothing. Commit to the story line or forget it entirely.


Jamie Carie is an inspired fiction writer and B&H is a religious publishing group but The Guardian Duke doesn’t feel like most of the religion based fiction I've encountered. Alex mentions God and faith in her letters and lets loose the occasional prayer but just the same, I found it incredibly easy to forget heroine is in fact a devout character. There is too much religion to say the book shouldn't be classified as inspired fiction but I also feel there isn't enough to it to feel like it solidly belongs in the genre. Again, half-baked.


In terms of storytelling I was frustrated that there was no real climax. There is this huge build up and then… nothing. There is an art to writing series. The books need to be connected but each edition also needs to feel like a complete story in and of itself. For me, The Guardian Duke felt like an extended epilogue.


On the upside, I did like what Carie did with the letters. I live in an age where people fall in love online, essentially losing themselves to someone else’s words. Carie’s handling of the letters between Gabriel and Alex and the emotions each felt upon reading the correspondence translated very well throughout the book.


Light regency romance recommended to fans of the Daughters of Mannerling by Marion Chesney.

It was a  sad truth that lies had always flown out of her mouth with the ease of a bard telling a tall tale. She couldn't seem to help it.