A Duty to the Dead by Charles Todd 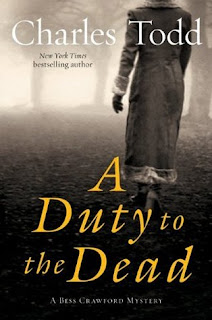 From the brilliantly imaginative New York Times bestselling author Charles Todd comes an unforgettable new character in an exceptional new series. England, 1916. Independent-minded Bess Crawford's upbringing is far different from that of the usual upper-middle-class British gentlewoman. Growing up in India, she learned the importance of responsibility, honor, and duty from her officer father. At the outbreak of World War I, she followed in his footsteps and volunteered for the nursing corps, serving from the battlefields of France to the doomed hospital ship Britannic. On one voyage, Bess grows fond of the young, gravely wounded Lieutenant Arthur Graham. Something rests heavily on his conscience, and to give him a little peace as he dies, she promises to deliver a message to his brother. It is some months before she can carry out this duty, and when she's next in England, she herself is recovering from a wound. When Bess arrives at the Graham house in Kent, Jonathan Graham listens to his brother's last wishes with surprising indifference. Neither his mother nor his brother Timothy seems to think it has any significance. Unsettled by this, Bess is about to take her leave when sudden tragedy envelops her. She quickly discovers that fulfilling this duty to the dead has thrust her into a maelstrom of intrigue and murder that will endanger her own life and test her courage as not even war has.

I don't have much of a background with regards to World War I lit. All Quiet on the Western Front all but killed my interest in the genre. For years I wouldn’t touch anything on the subject. I changed my tune after reading Barbed Wire and Roses. The book left such an impression on me that I started looking for other books set during the Great War. One of the first titles that caught my eye was a murder mystery involving a young war era nurse. I all but ran to the library to find a copy of Duty to the Dead.

Now, I rarely have this problem but every time I opened this book I found myself fighting to remain conscious. The plot was decent but the writing was bland, the characters forgettable and the murder mystery decidedly mediocre. I did enjoy the complicated web of loyalty between the various members of the Graham family but the lifeless story telling killed the book as a whole.

Looking back, the only really notable aspect of Duty to the Dead was the sinking of the Britannic but even here I felt short changed. While technically well-illustrated I found myself caring more about the historical event than its place in Todd’s story. I liked it but it has little relevance to Bess Crawford's experience with the Grahams. I find it sad that the most interesting scenes in the book don't really fit the rest of the novel.

This was my first time reading Charles Todd and I can’t say I am that impressed. I’m not writing off other titles by this mother/son writing team but I’m in no hurry to sample their other work.

It was impossible not to like him, and liking him, it was impossible not to feel something for him as he fought a gallant but losing battle with death. I wasn't foolish enough to believe I was in love, but I was honest enough to admit I cared more than I should. I'd watched so many wounded die. Perhaps that was why I desperately wanted to see this one and snatch a victory out of defeat and restore my faith in the goodness of God. But it was not to be.