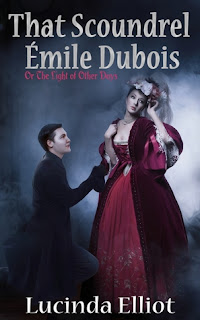 When young Sophie de Courcy, bored but patient companion to the Countess of Ruthin, agrees to marry her long-time hero, dashing French rogue Émile Dubois, she is catapulted into a dangerous world of Man Vampires and Time Warps. With the help of Agnes, her no nonsense, tarot-reading Welsh maid, she must come to terms with his scandalous past, help him defeat the evil Vampire neighbours and help Émile escape from the machinations of time which threaten to destroy their new found love. All this in just one book!'Scoundrel' is an entertaining, over-the-top Gothic adventure, alive with colourful character comedy as it flits between Revolutionary France and misty Wales. 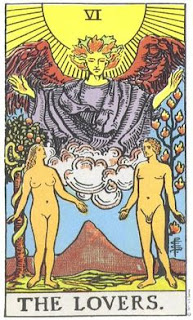 How to describe Lucinda Elliot's That Scoundrel Emile Dubois? I've been pondering the question for some time, but nothing I put together quite seems to do the book justice.

I am somewhat hesitate to make the comparison because so many have such strong feelings in regards to the classics, but  reading Scoundrel took me straight back to A Tale of Two Cities and Dracula, both of which are ranked among my personal all time favorites. Elliot replicated the spirit and feel of these books in a most creative and original manner, seamlessly blending historic fiction and paranormal with good old fashioned story telling and strikingly characters in one memorable volume.

One aspect of particular note was the integration of French and Welsh into the dialogue. It is one thing to set a story against the French Revolution and the mysterious Welsh hills but Elliot's use of language adds an appealing touch of authenticity that setting and description could not manage alone.

Of course Elliot doesn't stop there. She also incorporates several recognizable items of note from Ann Radcliffe's The Mysteries of Uldolpho to Samuel Richardson's Pamela. I personally appreciated the reference to the Marquis de Sade and the appearance of a famous line from Thomas More, but that's the historian in me talking.

Don't make the mistake of thinking That Scoundrel Emile Dubois is yet another vampire novel for it is anything but typical. Elliot's is a richly imagined, original story, that is guaranteed to sweep you off your feet.

"I cannot endure to lose you, leave alone what must follow. I have never been a vengeful man before, but that monster shall pay for this..."