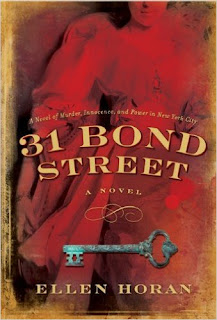 The sensational murder of Dr. Harvey Burdell in his lower Manhattan home made front-page news across the United States in 1857. "Who killed Dr. Burdell?" was a question that gripped the nation. 31 Bond Street, a debut novel by Ellen Horan, interweaves fiction with actual events in a clever historical narrative that blends romance, politics, greed and sexual intrigue in a suspenseful drama. The story opens when an errand boy discovers Burdell's body in the bedroom of his posh Bond Street home. The novel's central characters are Dr. Harvey Burdell, a dentist and unscrupulous businessman; his lover, the ambitious, Brooklyn-born Emma Cunningham; the District Attorney, Abraham Oakey Hall (later to become mayor of New York); and Henry Clinton, a prominent defense lawyer. The enigmatic relationship between Emma and Dr. Burdell makes her the prime suspect, and her trial is nothing less than sensational.

The murder of Dr. Harvey Burdell and the subsequent trial of Emma Cunningham captured the public imagination when it first appeared in the papers. New Yorkers eagerly anticipated each and every tidbit of information regarding the deceased dentist, the assumed mistress claiming to be his wife and the court room drama surrounding the question of her guilt. Ellen Horan's 31 Bond Street brilliantly recaptures that fascination, revitalizing it  for an audience far removed from the pre civil war America in which it occurred.

One of my favorite aspects of the book was not the characters or even the events of which they are a part, but the backdrop on which the story takes place. New York City in the mid-1800s was a veritable cesspool for the greedy and corrupt. The titillating homicide of a prominent citizen with a shady reputation provides a perfect platform to showcase the ugly underbelly of the city's history. Not only did Horan recognize this, she took and ran with it, exploring every angle from the unscrupulous political machine that tainted every branch of the city's government to the unethical practices that characterized her business interests.

This attention to detail caught me hook, line and sinker from the very beginning. The subject matter alone is captivating but the obvious research and time Horan put into making it come alive in print is evident on nearly every page, her genuine interest in the story unmistakable. I truly admire such commitment not only to her readers, but also to the history the author chose to showcase.

Obviously Horan can identify a story and re-imagining the past doesn't phase her in the least. I only wish I could say I enjoyed the cast as much. Don't get me wrong, these aren't poor characterizations, but as a group, they didn't quite hit it out of the park. Harvey, Emma and Ambrose piqued my imagination, but Katuma and Quietta both came short of the mark. Perhaps it is because these two have prominent roles, but no historic counterparts? I'm not entirely sure and I hesitate to assume as I was so impressed by Henry and Elizabeth, two characters who while based on real people are largely imagined by the author.

All in all 31 Bond Street is a wonderful read. Ellen Horan vividly recaptures the spectacle and intrigue of the 1857 case that shocked nation. Not to be missed.

Dr Burdell was sprawled in the center of the floor, his arms outstretched, and his head in a sticky puddle that had hardened like tar. His lips were pendant and blue. His throat was slashed with a wound so deep that it nearly detached the head from the torso, revealing a sinewy tangle of muscle and tiny pearls of spine.