She Wulf by Sheryl Steines 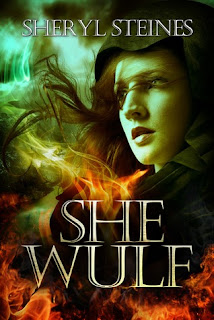 He came through the centuries to find her, the girl who could save them all. Annie Pearce runs through the streets of the city, chasing a demon, the likes she has never seen before. As she works to find out where the demon came from, the Wizard Guard encounters something even more bizarre. A tenth century Viking. When Annie gets sucked into the past, she must struggle with the knowledge of the prophecy that tells of her destiny. The one she must fulfill if she is to return home. What happens in the past will change the world.

I liked Sheryl Steines' She Wulf a lot in terms of plot, but I wasn't entirely sold on other aspects of the book. Some of this might be due to my having skipped book one of the series, but the elements I didn’t appreciate seemed structural in that they felt underdeveloped within the context of the story.

Many reviewers have claimed to feel real chemistry between Annie and Cham, but I didn't see it. Forgive me, but is seemed a very one sided affair in my eyes. Cham reads as an adoring, almost obsessive, devotee. For her part, Annie is tolerant, but the affection she returns feels lukewarm at best. From what I understand, the relationship is a prominent in book one of the series and had I not bypassed the novel, I might have had a greater understanding and appreciation for the dynamic between these characters, but as it stands, something struck me as missing from their relationship.

Magic is something of an ambiguous concept in fiction. I can understand that, but I still like to see some effort put towards explaining its nature and function. "'We could divine for them using a written timeline like a map... I think it should work just like a map once I link it to a crystal. I can use the fabric from the demon.'" Say what? There is no explanation to how this works! How does one link a crystal to anything? Are we to assume the crystal is also linked to the fabric? I needed explanation.

I’m obviously a picky reader, but the book is not entirely without merit. Steines' combining of Nordic and Anglo Saxon culture and mythology was a stroke of genius. It’s not the page turner I was anticipating, but its adaptation of Beowulf is noteworthy in its own way.

"I see you struggling with this, but you're a good woman and you will stay and help us. It's in your nature to fix what is wrong. You are lost and need to find your way."