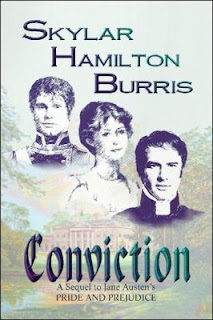 Conviction, a satirical, original sequel to Jane Austen's timeless classic Pride and Prejudice, reveals the romantic destiny of Georgiana Darcy. The author, however, does not rest on the laurels of Austen; she introduces an entirely new cast of characters, including an ambitious soldier, a wistful vicar, a flirtatious abolitionist, and an ordinary curate. The fates of these characters intertwine as each struggles to find the conviction to live out his or her own calling while confronting issues of loyalty, courage, faith, and love. Conviction is not a novel merely for fans of Pride and Prejudice, but for all who take part in the ordinary struggles of humanity.

Despite reading several of them, I've never been a particular fan of re-tellings of Pride and Prejudice as they almost never live up to the original. Still, Skylar Hamilton Burris has come nearer than most with her first solo piece.

I've seen several film versions of the novel but I think the 2005 portrayal of Georgiana Darcy by Tazmin Merchant is my favorite. The young actress captured the shy innocent child seen in Austen's masterpiece. Perhaps this is why I liked Burris' characterization so much. She captured those same characteristics in her portrayal of Georgiana when she published Conviction the year before, but the nature of her work allowed her to expand on them and showcase how they might have shaped the woman Georgiana might have become.

Burris' treatment of Austen's characters and the world they inhabit is respectful, but the genius of the piece is that she doesn't attempt to match her predecessor stroke for stoke. Her work gently incorporates more political themes, introduces entirely new characters and is written in a voice that is all her own. Being that Conviction is written as a sequel the comparison was inevitable, but this is not an author who wished to appear as someone other than herself and I found I appreciated her all the more for it.

To say I found Burris' approach refreshing is an understatement. It is a welcome change and one I wish more authors would adopt. Conviction is an admirable followup to the original and well worth looking into.

Major Talbot had praised her for her sweetness, her beauty, her innocence and for her excellence in those fields society deemed 'accomplishments'. Yet he knew little of her mind and soul.