Rosa and the Prince by Kathryn Braund 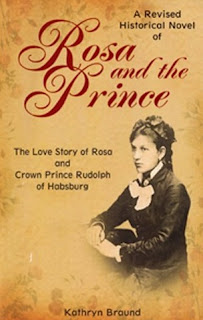 Abused by her uncle and disowned by her father, 16 year old Rosa is "given" to Henry, a forester, who is traveling from Budapest, Hungary to the Austrian Alpine to work for the Royals, the Habsburgs. There she meets Crown Prince Rudolph of Habsburg and his cousin, Archduke Otto. Crown Prince Rudolph and Rosa begin their romance after her husband's accidental death. Rudolph takes Rosa to Vienna. He places her under the protection of a Countess. The story of their love affair is a passionate, unforgettable and heart-wrenching story. It will deeply affect anyone who has suffered love and subsequent loss.

I hesitate to be critical of the this one because it was inspired by a family story, but I can't say I much enjoyed Kathryn Braund's Rosa and the Prince.

With all due respect to the author, I can not bring myself to agree with her perception of Rudolph. I own several nonfiction titles on him, many of the same titles listed in Braund's bibliography in fact, and nothing I've come across has led me to believe the Crown Prince was a particular romantic. In point of fact, my obsessive research has led me to understand that to popular view of Rudolph is a fantasy shaped largely by unsubstantiated rumor, various cinematic adaptations of his short and tragic life and fictions such as this.

In addition to my opposition to the author's portrayal of Rudolph, I felt the storytelling exceedingly rough. For example, many of the opening chapters are told from the perspective of Henry Behrens which is somewhat awkward as Braund paints him as a crude, offensive personality who Rosa herself doesn't even like let alone love. I have to wonder what led the author to tell anything from his point of view as her regard for him is clearly lacking, his importance to the story is minimal at best and when her intent in writing the piece is to glorify Rosa's subsequent relationship with the Crown Prince. It makes no sense and as a reader I was most disappointed by the author's inability to recognize how this choice undermines the main storyline and the confusion it brings to her audience.

Is the book based on a real relationship? I'm sorry, but I am not in a position to say. It might very well may be true as I've found nothing to disprove it, but by the same token, this fiction is also the only account I've come across indicating it to have happened. This being the case my comments reflect only my opinion of the story as written by Braund and in that regard I can honestly state I believe Rosa and the Prince to have been shaped more by the author's romantic idealization of family lore than verifiable historic fact.

I wasn't born to be forced into a loveless marriage. I've never wanted to be a husband, but  because I am a Habsburg Prince, I am a sacrificial lamb.