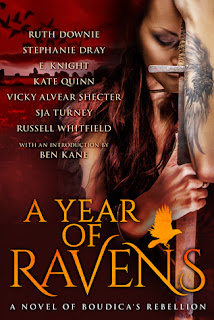 Britannia: land of mist and magic clinging to the western edge of the Roman Empire. A red-haired queen named Boudica led her people in a desperate rebellion against the might of Rome, an epic struggle destined to consume heroes and cowards, young and old, Roman and Celt... and these are their stories. A calculating queen sees the sparks of revolt in a king’s death. A neglected slave girl seizes her own courage as Boudica calls for war. An idealistic tribune finds manhood in a brutal baptism of blood and slaughter. A conflicted warrior hovers between loyalty to tribe and loyalty to Rome. A death-haunted Druid challenges the gods themselves to ensure victory for his people. An old champion struggles for everlasting glory in the final battle against the legions. A fiery princess fights to salvage the pieces of her mother’s dream as the ravens circle. A novel in seven parts, overlapping stories of warriors and peacemakers, queens and slaves, Romans and Celts who cross paths during Boudica’s epic rebellion. But who will survive to see the dawn of a new Britannia, and who will fall to feed the ravens?

Historically speaking, anthologies haven’t worked well for me, but books like Grand Central and A Day of Fire have slowly changed my opinion of the format. I wouldn’t consider myself a true fan just yet, but I’m not outright opposed that’s saying something considering past experiences.

Though a novel in an of itself, the book is structured with the reader in mind. Should any section fail to interest, the audience is free to move ahead without losing the primary story line. I personally wouldn't recommend it as each section has certain merits, but I appreciate the effort put into the construction of the novel just the same.

Much like A Day of Fire, A Year of Ravens centers on a particular noteworthy event. The stories featured in the anthology are set against Boudica’s Rebellion and while I’ve seen the drama fictionalized before, I couldn’t help appreciating how these seven authors captured it from so many uniquely diverse points of view.

Each contribution is characterized by the author's individual style, but each is linked by both characters and contents. The end result is as multifaceted and varied as the writers themselves. Violent and striking, this is not a story for those opposed to brutality and bloodshed, but that said, I found it exceptionally well-drawn and historically satisfying.

I had trouble with Dray’s contribution, but please, hear me out before you jump to any conclusions. The short features Queen Cartimandua and illustrates rising tensions between the tribes and the Romans. It’s informative, emotional and engaging. Problem is, Dray’s interpretation of Cartimandua is a force in and of herself, she’s worthy of more than the few pages she receives here and I was genuine frustrated at not being able it indulge in more of her story as written by this particular writer.

Ruthie Downie was a new author for me, but one I greatly enjoyed getting to know through her contribution to this anthology. Her style and tone drew me immediately into Ria’s story and I was quickly lost in the experiences of the all but invisible slave girl. Ria circumstances give her a unique perspective of the royal family and I liked the contrast it created in the fabric of the novel. Ria’s emotional journey is also worth mentioning as it’s probably one of the most complex of the entire book.

Russell Whitfield is an author I’ve wanted to read for quite some time, but his contribution to A Year of Ravens marks my first experience with his work and it was definitely worth the wait. Agricola proved an interesting narrator for a number of reasons and his journey to the island of Mona marked one of the high points of the collection. His story felt more drawn out than the other contributions, but I ultimately enjoyed where Whitfield took his contribution and the themes he highlighted in it.

Nothing I say about Vicky Alvear Shecter’s The Druid will do it justice. I’ve read the author before, but the drama she created for Yorath and Felix literally sent chills down my spine. I enjoyed each of the preceding stories for different reasons, but this selection jumped from the page and took hold in way the others hadn’t. I hate sounding like a gushing fan girl, but I loved everything about this short and am not shy to admit it my favorite of the anthology.

S.J.A. Turney was another new author for me which is funny as his story features Andecarus, a character who first caught my eye in Ruth Downie’s The Slave. I went into both pieces not knowing what to expect, but found both satisfying in their way. Turney’s interpretation of Andecarus is both compelling and thought-provoking and I enjoyed the perspective he captured in someone who felt divided loyalties during the conflict.

I’m almost afraid to comment on Kate Quinn’s contribution. I’ve never made any secret of my appreciation for her work and while I try to remain objective in my analysis, I’d like to point out that it isn’t my fault that she keeps hitting the ball out of the park. Her illustrations of both Duro and Valeria had me hooked from page one, but it was the way the story drew the others together that stands out in my mind. The other stories linked here or there, but I felt this particular effort was the most comprehensive of the book.

I love E. Knight’s work and looked forward to it when I first picked up the book, but I’d be lying if I didn’t admit my enthusiasm for The Daughters grew over the course of the book. Keena and Sorcha dance in and out of the other stories. They tease the reader and of all the characters, I felt it apropos that theirs be the last installment of the anthology. Knight’s interpretation is powerfully drawn and stands as a commanding and poignant footnote to the epic battle that inspired all seven authors to put pen to paper.

Sounds like I need to write a Cartimandua novel. Thanks for the kind and thoughtful review!

amazing post. thanks for sharing this article.
Delhi to Taj Mahal Tour