Murder on the Last Frontier by Cathy Pegau 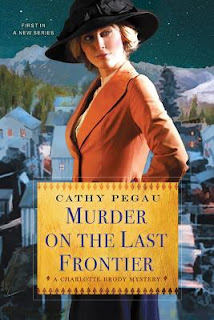 There’s many who feel the Alaska Territory is no place for a woman on her own. But Charlotte Brody, suffragette and journalist, has never let public opinion dictate her life choices. She’s come to the frontier town of Cordova, where her brother Michael practices medicine, for the same reason many come to Alaska—to start over. Cordova is gradually getting civilized, but the town is still rougher than Charlotte imagined. And when a local prostitute—one of the working girls her brother has been treating—is found brutally murdered, Charlotte learns firsthand how rough the frontier can be. Although the town may not consider the murder of a prostitute worthy of investigation, Charlotte’s feminist beliefs motivate her to seek justice for the woman. And there’s something else—the woman was hiding a secret, one that reminds Charlotte of her own painful past. As Charlotte searches for answers, she soon finds her own life in danger from a cold-blooded killer desperate to keep dark secrets from seeing the light of day…

My first thought on seeing Cathy Pegau’s Murder on the Last Frontier was to run as fast as I could in the opposite direction. I mean absolutely no offense to the author, but the last Alaskan fiction I attempted scarred me for life and reviving the memory wasn’t high on my to-do list. Still, something about the premise piqued my interest and to make a long story short, I bit the bullet, quashed my doubts, and put in for a review copy.

I guess I should start by saying that I found Charlotte Brody a fascinating heroine. She is a feminist and a suffragette, but she doesn’t pontificate. She lives by her beliefs and I found the subtly of her character inviting. I was also struck by her opinion of the working girls of Cordova. Her thoughts may be described as modern, but I appreciated them because they felt appropriate to someone in Charlotte’s situation.

Charlotte’s brother Michael was equally interesting and I loved backstory Pegau created for him. Many of the characters have come to Cordova in search of a fresh start, but the Michael’s motivations felt incredibly authentic and I liked the history perspective his circumstances afforded.

James’ role as Charlotte’s love interest was predictable, but I think the way Pegau played it genuinely realistic. The two don’t fall into one another’s arms and declare their undying affection and I liked that. These characters have emotional baggage they’re struggling to rectify and I thought their hesitancy and caution both refreshing and original.

The mystery itself is not overly complex, but it is engaging nonetheless. I felt invested in the plot despite accurately identifying the culprit and I enjoyed the atmospheric quality of the narrative Pagau put forth.

Retreating into her room, she pushed her door closed and leaned her forehead against the cool wood. Not even twenty-four hours in town and she’d twice been mistaken for a sporting woman. A wry laugh escaped her throat. Surely that was some sort of record.