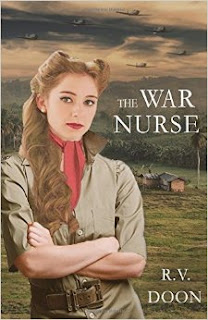 The War Nurse is a historical family saga and epic military romance set during WWII. This historical thriller begins on the eve of WWII in the Philippines. Katarina Stahl an American Red Cross nurse, is the happiest she’s ever been in her life. She’s making love and playing music with Jack Gallagher in an idyllic paradise. Their medical mission is over, the boat tickets to home are purchased, and all that remains is to fly a sick child to the hospital at Clark Air Field. She never expected to witness bombs falling out of planes. In those terrifying first minutes, she frees a German doctor accused of spying and saves his life. She turns to nursing the injured, unaware she’s unleashed an obsession more dangerous to her and those she loves, than the war she’s trapped in. Doctor von Wettin, the man she freed, finds Katarina pregnant and starving in a POW camp after the surrender. He begs her to nurse his bed-ridden wife. She knows other Americans will despise her, but wants her baby to live after surviving Bataan. Their uneasy alliance is destroyed when she discovers he exploited Red Cross diplomatic channels and contacts at the German embassy to wire money to her parents. His benevolent mask slips when he informs her that her brothers and parents are interned on Ellis Island. When the Stahl family is swept up in the FBI’s dragnet, Josep Stahl believes it’s all a misunderstanding. He’s interrogated like a criminal at the city jail, a military camp, Ellis Island, and then the civilian internment camps in Texas. His anger and pride blind him. One by one in this painful family drama, his wife and sons join him behind barbed wire in. There they face ostracism, segregation, and, most frightening, repatriation. Katarina begins an even more terrifying journey into depraved darkness as Manila descends into occupation and chaos. The doctor threatens everyone she loves: infant son, POW husband, and Filipino friends. She’ll do anything to protect them; she lies, steals, and smuggles. As the war turns against the Japanese, they withhold the doctor’s wife’s life-saving medications until he finds a hidden radio inside the civilian internment camp. If Katarina refuses to help him, her son pays the price. Survival has corrupted Katarina; but she’s not about to become his camp rat. After years of hell, she’s earned her nickname, war nurse. Doctor von Wettin is about to find out what that means.

My nose for WWII literature has led me to a number of interesting titles. The Bone Church, Fires of London and The Wherewithal jump immediately to mind, but R.V. Doon's The War Nurse was different. Since reading Ghost Soldiers by Hampton Sides in 2009, I've been fascinated with the experiences of those caught behind enemy lines when Japan invaded the Philippines and hoped Doon's fiction would do justice to the history on which it was based.

Did she succeed? I'm hesitant to say. Her effort certainly sheds light on the political situation and how quickly things went from bad to worse, but I felt the material was often lost in the complex intrigue that envelops the Stahl family over the course of the novel. Doon touches on a lot of compelling material and highlights an interesting parallel between the Japanese POW and US internment camps, but in retrospect, I can't help feeling the fictional drama, sizable cast and sheer magnitude of the novel's scope overwhelming and somewhat awkward.

The story itself is quite intricate, but personally I'd have liked to see more character development and atmospheric detail incorporated into the telling. Doon has the right idea, but plot points hit with the speed and rapidity of .30 caliber Browning, the weight and import of each never being allowed to settle between one impact and the next. Maybe it’s just me, but I feel the themes she wished to express and emotions she sought to elicit would have been more powerful and persuasive if tackled with a more delicate hand.

At the end of the day, I admire The War Nurse for its entertainment value. It leans towards the theatrical, but that's common fair in war era fiction. The story kept me engaged beginning to end and that’s more than I can say of many titles and while I feel it could have been stronger, I think the right reader will find its imaginative complexities and feisty heroine quite enjoyable.

"You're addicted to taking risks," Evie said, and then she took a deep breath. "From the moment you hit the Philippines, you're ignored the rules. I admire you... I do, but you're incarcerated now. Get used to it."

Check Out All the Stops on R.V. Doon's The War Nurse Blog Tour Schedule