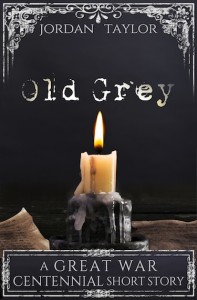 There is so much Lieutenant Rhodes never learned in officer training. So much about realities of the Western Front in 1916 he arrived unprepared for. Yet one job faces him which he’s sure he can handle: censoring outgoing letters from the men. As he reads through the gloom of his dugout, Rhodes discovers he knows far less than he imagined—not only about the Front, but about camaraderie, loss, and the human face of war.

Taken as I was with the Great War Centennial series, I jumped straight from Poppy Lane into Old Grey. The books are not taxing by any means, but tackling three in a row evidenced I was sacrificing sleep for these books and despite my reputation and voracious appetite for literature, that doesn’t happen as often as you might imagine.

Loss is poignant and popular theme in war time literature, but I’ve never seen it handled quite like this. Though we only meet one character, Taylor employed a variety of voices in Old Grey. The result is remarkably affective and memorable and highlights a gift few storytellers can claim to possess.

I’ve seen firsthand the camaraderie that exists between those who’ve served together and appreciate the authenticity in Taylor’s interpretation. Old Grey is a somber story, but a moving one that captures many aspects of loss in the line of duty.

I have mentioned our lieutenant many times, of course. He read my letters, so you see one says only a sample on paper. Now The Old Grey has fallen and his shadow haunts our lips, our vision, our pens. Often, one does not speak much, even any, of the dead. The time is up. The living must remain unaffected. Or suffer madness. The Old Grey will not be ignored.