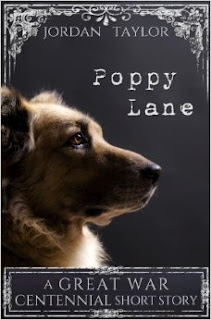 When a stray dog wanders into a trench, it’s no surprise: soldiers often see bewildered animals. Yet the stray of a frontline known as Poppy Lane will not leave, despite encouragement from some to do so. As seasons change and men flux in and out of the trench, the dog remains through floods, snow, shelling, and great battles she cannot understand—until she has transformed the face of Poppy Lane forever.

I’d planned to read a few pages before putting myself to bed, but the unexpected emotion elicited by Jordan Taylor’s Young Blood prompted me to put my plans aside in favor of Poppy Lane. For the record, the Great War Centennial series can be read in any order, I simply tackled them as they appeared on my kindle.

Loyalty and compassion take on special meaning in this piece which is rather remarkable as it’s told from a dog’s perspective. The comings and goings of the various divisions, the mixed reactions to Poppy’s presence on the line and the ultimate revelation of her motivation is quite touching and paints very intimate portrait of the traditionally bleak backdrop of life in the trenches.

Unlike Young Blood, there was no author’s note to anchor Poppy Lane and while I understand the dramatic difference in subject matter, I felt the absence and wished Taylor had left some record of her inspiration. Poppy’s is a simple story, but it resonates a sentimentality that is absolutely timeless and I'd have liked to know more about it.

Each time she looks up, it seems she can see less. Each time she hears a footfall in the doorway at the gas curtain, the sound comes less distinct. Eyes growing clouded, deafened from years of shells, she goes on waiting, watching.