The Lost Crown: A Novel of Romanov Russia by Sarah Miller 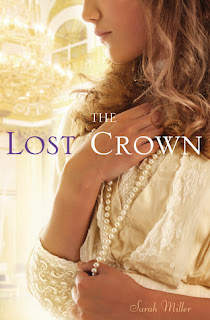 Olga, Tatiana, Maria, and Anastasia. Like the fingers on a hand--first headstrong Olga; then Tatiana, the tallest; Maria the most hopeful for a ring; and Anastasia, the smallest. These are the daughters of Tsar Nicholas II, grand duchesses living a life steeped in tradition and privilege. They are each on the brink of starting their own lives, at the mercy of royal matchmakers. The summer of 1914 is that precious last wink of time when they can still be sisters together--sisters that link arms and laugh, sisters that share their dreams and worries, and flirt with the officers of their imperial yacht. But in a gunshot the future changes for these sisters and for Russia. As World War I ignites across Europe, political unrest sweeps Russia. First dissent, then disorder, mutiny, and revolution. For Olga, Tatiana, Maria and Anastasia, the end of their girlhood together is colliding with the end of more than they ever imagined. At the same time hopeful and hopeless, naive and wise, the voices of these sisters become a chorus singing the final song of Imperial Russia. Impeccably researched and utterly fascinating, this novel by acclaimed author Sarah Miller recounts the final days of Imperial Russia with lyricism, criticism and true compassion.

I attempted a fictional account of the Romanovs' last days almost a year ago and I'm still not over the experience. I was and am so disgusted with The House of Special Purpose that I almost skipped out on Sarah Miller's The Lost Crown. I seriously considered abandoning it at my library’s hold desk when they informed me it was ready, but I hate making the librarians process requests for no reason so I schlepped my butt downtown. Four hundred and forty eight pages later, well, let’s just say the trip was well worth the effort.

Most fictional versions of the story focus on a single individual, usually one of the younger set and inevitably tackle how they escaped the basement of the Impatiev house and went on after the revolution. I tend to excuse stories published before 2008, but since the official identification of the last two family member, I find my tolerance for such fantasies is extremely limited, especially when they appear without a disclaimer. Yes, I’m referring to The House of Special Purpose. I did mention I’m still bitter right? Point I’m getting at here is that Miller's version ends in July 1918 and I found her adherence to what we now know to have happened both admirable and refreshing.

The true genius of The Lost Crown can be found in its format. Telling the story from the combined perspective of all four Grand Duchesses must have been quite an undertaking, but her effort pays off in the best possible way. Each girl is distinct and I liked how Miller’s treatment of each allowed the reader to interpret them as individuals rather than a combined group. I enjoyed Miller's interpretation of the younger set, but it was the older set that caught my eye. Olga and Tatiana are usually regulated to supporting roles and I relished the opportunity to explore their characters through Miller’s fiction.

Another particularly noteworthy aspect of The Lost Crown is Miller’s exploration of the family's public roles prior to captivity. The book doesn't focus entirely on the glamour and privileges of their station, but also covers the relatively mundane patterns of their daily lives as well as the volunteer work the girls did as part of the war effort. Miller took great care to honor historic context over the course of the narrative and I think that attention to detail sets the novel above much of its competition.

I cross myself and close my eyes. Where we go next we go together.

I've never read anything fictional about
the Romanovs but to be honest that having the history of Russia and Soviet Union pounded in my head when in school (communist Poland in the 80's), I'm not quite ready to read it for pleasure yet. But I'm getting there :)

I think the reason you shy from it is the same reason I am drawn to it. The American education system lacks in a lot of areas, but particularly in international studies. Totally understand where you are coming from though. :D

Wow, I think I've found my next book going on my TBR pile! With my mother being part Russian, I like reading about Tsar Nicholas.

The Lost Crown is definitely a good one. :)