The House of Special Purpose by Colin Falconer 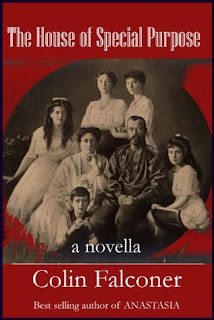 
For years no one knew what happened to Czar Nicholas and his family after the Bolshevik Revolution of 1917. It was decades before the whole truth came out. The deadly account of what happened to them in Ekatinerberg, in the House of Special Purpose draws on eyewitness accounts and is told from the point of view of Anastasia, the Czar's youngest daughter. The facts are so ghastly - and so farcical - they defy belief. The story brings to vivid life the events of the last months of the Romanovs and is the prequel to Colin Falconer's bestselling novel: Anastasia. How was it possible for any of the children to have survived? You won't believe the answer; except that it's all true.

I must apologize. I’ve hardly done any reading lately and as a result I have neglected my blog. In truth I haven’t been feeling all that great, but I’m back on my feet. Well, better than I’ve been at any rate. Anyway, enough about me. Now for my thoughts on The House of Special Purpose.

There is a line in historic fiction. It is either a fictional account of the truth or a fantastic romp featuring characters who happen to have actually existed. I favor the former and in general don’t have a lot of appreciation for the latter. Colin Falconer’s novella might entertain those unfamiliar with the facts, but I found his story poorly researched. Some elements appear to be purely fabricated while others are based on nothing more than rumor and gossip.

In Falconer’s narrative, all five children arrive in Yekaterinberg together. This is an element that contradicts the known facts. The family was briefly separated in April 1918. Alexandra (or Alexandria as Falconer sometimes refers to her) and Nicholas traveled with Maria several weeks before the other children. Olga, Tatiana, Anastasia and Alexei remained in Tobolsk until Alexei was well enough to make the journey.

Every chapter opens with a quotation, a few unattributed lines of text. This is what I mean by fabrications. The content doesn’t concern me as much as the lack of source material. These quotes don’t appear in any other document. I’ve googled them and the only results are hits for Falconer’s work. I guess I don’t understand why the chapters open this way. The quotes appear out of place in the story as well as misleading as they don’t appear to belong to any character historic or fictitious.

As for elements based on rumor and unverifiable fact I have only three words to give you: Tatiana ganged raped. I know rape was a common rumor and I understand why. Four princesses held in captivity until their bloody execution. What vilifies their captors more than portraying them as having stripped away of the innocence of one of these young women by violating her body? I’ve read several books on the family's captivity, but not one of those academic texts states that a rape occurred in the Ipatiev House. One of the guards said “I felt the empress myself and she was warm” and another is supposed to have declared “Now I can die in peace because I have squeezed the empress’s breasts” while disposing of the bodies, but beyond the rather disgusting idea of violating a corpse I’ve found nothing to support the event Falconer exploits in the course of his story.

I have a million other comments on the novella, but I think one example of each point more than adequately expresses my opinion. Would I feel differently if Falconer explained the content in his author’s notes? Perhaps, though I think it is important to state that The House of Special Purpose carries no disclaimers, no references, nothing beyond “If you enjoyed this book, look for the sequel: Anastasia now out on Kindle: US and Kindle UK.” The lack of commentary speaks louder than the piece itself and the sales attempt discloses what I believe to be the true purpose behind the piece.

The truth of the Romanov’s last days will never be known, but I find Falconer’s version overly exaggerated and sensational. A disgraceful exploitation of the tragic fate of the Romanovs. The only thing I find more upsetting is the final line of the cover blurb. It’s all true. This story was published in 2011. The remains of Nicholas, Alexandra, Olga, Tatiana, Botkin, Demidova, Trupp, Kharitonov and one of the younger daughters were discovered in 1979 and were officially identified through DNA testing in 1998. The remains of Alexei and the last Grand Duchess were discovered in 2007 and officially identified through DNA in 2008. The idea of a survivor is great story telling fodder, but at this point, when science has disproved the possibility, I have a lot more respect for the authors who stick to fictionalizing the unknown aspects of what we know to have happened.

One final note. The sequel blurb (I have no intention of actually reading the book) put me in mind of the 1986 made for tv movie Anastasia: The Mystery of Anna which starred Amy Irving, Olivia de Havilland, Omar Sharif, Rex Harrison and a very young Christian Bale. The Mystery of Anna takes place in two parts, featuring the last days of the family, then flashing forward to a young woman throwing herself into a river in Berlin. The woman is rescued and sent to an institution where she is diagnosed amnesic. The story is of course based on the life of Anna Anderson. Falconer’s Anastasia appears to take place in Shanghai, obviously not Berlin, but according to the blurb the story also begins with an amnesic woman being rescued from a river. I sincerely hope my initial impressions prove incorrect, but I can't help but be turned off by the overused story line.

Two more bullets hit the doctor in the stomach and as he doubled over she saw another bullet make a sudden, dark hole in the top of his bald head and he collapsed into the floor.

Have contemplated reading the Anastasia book.. was not aware of a prequel. Hm. I'm now undecided. On one hand, it sounds interesting, on the other...

Your call Tara. I hope Anastasia is better than The House of Special Purpose. Just not something I am in the market for.