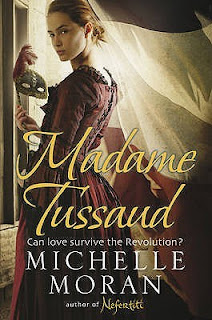 The world knows Madame Tussaud as a wax artist extraordinaire... but who was this woman who became one of the most famous sculptresses of all time? In these pages, her tumultuous and amazing story comes to life as only Michelle Moran can tell it. The year is 1788, and a revolution is about to begin.

Smart and ambitious, Marie Tussaud has learned the secrets of wax sculpting by working alongside her uncle in their celebrated wax museum, the Salon de Cire. From her popular model of the American ambassador, Thomas Jefferson, to her tableau of the royal family at dinner, Marie's museum provides Parisians with the very latest news on fashion, gossip, and even politics. Her customers hail from every walk of life, yet her greatest dream is to attract the attention of Marie Antoinette and Louis XVI; their stamp of approval on her work could catapult her and her museum to the fame and riches she desires. After months of anticipation, Marie learns that the royal family is willing to come and see their likenesses. When they finally arrive, the king's sister is so impressed that she requests Marie's presence at Versailles as a royal tutor in wax sculpting. It is a request Marie knows she cannot refuse - even if it means time away from her beloved Salon and her increasingly dear friend, Henri Charles.

As Marie gets to know her pupil, Princesse Élisabeth, she also becomes acquainted with the king and queen, who introduce her to the glamorous life at court. From lavish parties with more delicacies than she's ever seen to rooms filled with candles lit only once before being discarded, Marie steps into a world entirely different from her home on the Boulevard du Temple, where people are selling their teeth in order to put food on the table.

Meanwhile, many resent the vast separation between rich and poor. In salons and cafés across Paris, people like Camille Desmoulins, Jean-Paul Marat, and Maximilien Robespierre are lashing out against the monarchy. Soon, there's whispered talk of revolution... Will Marie be able to hold on to both the love of her life and her friendship with the royal family as France approaches civil war? And more important, will she be able to fulfill the demands of powerful revolutionaries who ask that she make the death masks of beheaded aristocrats, some of whom she knows?

Spanning five years, from the budding revolution to the Reign of Terror, Madame Tussaud brings us into the world of an incredible heroine whose talent for wax modeling saved her life and preserved the faces of a vanished kingdom

I’m willing to bet there are readers who disagree with me, but I think Michelle Moran a fabulous writer. Her style has a way of drawing you in and though I’ve no idea how, she manages to relate a lot of history without sounding like a college professor. Honestly folks, I had a lot of trouble putting Madame Tussaud down and suspect I’d have been glued to the couch my entire reading if not for the demands of a one year old.

My obvious appreciation aside, I will admit there are elements I found slightly disappointing. To begin with, Mademoiselle Grosholtz would be a far more accurate title for this piece. The story begins in 1788 and takes readers through 1795, the year Marie married Tussaud who really isn’t much of a character come to think of it. The remaining 55 years of Marie’s life are noted, but feel much like an afterthought which was frustrating as I find her life in England very interesting even compared to her time in France. The book is a wonderful story of the French Revolution, I just don’t think it a particularly good novel of Marie and her life’s work.

Another thing that bothered me was how little we see Marie indulging her artistic talents. A Royal Likeness also omitted the details, but I desperately wanted a scene in which Marie is seen molding the wax, painting the figures, or creating a tableaux. I wanted to witness her passion for crafting and feel cheated that Moran never took readers into Marie’s workroom. There is plenty of detail regarding the business itself, the financial aspects and daily operation of ticket sales and managing customers, but I think it might have been nice to explore the effort that went into manufacturing a figure and the pride of the artist when her work was finally set of display.

I was also confused by Marie’s sympathies for the royal family. I understand her personal relationship with them, but the fact that she felt more for them than her neighbors and peers left me scratching my head. Shouldn’t those relationships have caused intense conflict? People she loves were in danger on both sides, but only one came through the narrative. On the same note I would think the disparity between social classes would have made Marie more sympathetic to men like Marat and Robespierre, at least until their ideas took on a life of their own and led Paris into utter chaos. After all, Marie was a common woman and might have seen merit in some of their ideas despite the radical nature of their tactics.

I've listed many complaints, but please know they are minor at best. Moran’s work is excellently atmospheric and filled with memorable characters and genuine tension. There are things I felt missing from the novel, but Madame Tussaud is still fantastic a fiction and one I’d highly recommend to anyone interested in the French Revolution.

Sometimes, it is not the kings and queen who make for the most fascinating history but the shadowy souls who happen to be in the right place at the right time.