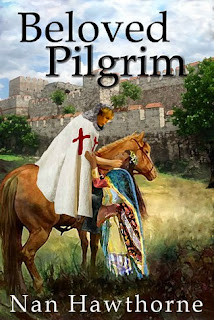 The doomed Crusade of 1101 is the backdrop for this story of a young noble woman who questions the values of her day and runs away to fight as a man. She learns along the way that honor and love are not always where you thought you would find them.

NOTE: It has come to my attention that Beloved Pilgrim has been republished by Ink Harmony Press. The descriptions for all editions of the novel have been updated and now affords more detailed insight to the content of the narrative. For personal reason relating to the author's response to my review, I will not be returning to this book, but I encourage readers to understand the issues I noted may not apply to more recent editions of the novel.

I am not ashamed to admit I was caught off-guard by the content of this piece. I originally thought the jacket description offered sufficient information on the title's subject matter, but quickly discovered my assumption false. I'd expected a story that explored gender roles and interracial relationships in the Middle Ages, but was surprised that the novel also focused on same-sex relationships. Personally, I couldn't care less one way or the other, medieval fiction is medieval fiction, but there are readers with different opinions and I worry the ambiguity in the description and cover art might backfire unfairly on both author and manuscript.

That said, I liked Hawthorne's enthusiasm and thought the idea to set such a story in a particularly dark and dangerous period rather interesting. There are instances where I felt the attitudes and thinking too modern for the era, but that's just me. This was an age of extremes that didn't offer much in the way of acceptance and while I appreciate where Hawthorne took the story, I often felt the author allowed theme to outweigh the realities of medieval life.

I thought the action sequences, battles and the characters very well-drawn and loved scenes where Elisabeth was faced with real issues like having to function in a suit of armor. The writing wasn't as fluid as I'd have liked, but again that's just me. I'm not sure it would bother anyone else, but there is it just the same.

Not what I expected, but a solid, creative and thought-provoking piece nonetheless.

Elisabeth cursed like one of the grooms as she tugged the hem of her skirt from the bramble where it was caught."Damn, if I could just wear britches like Elias and Albrecht I shouldn't have to deal with skirts!"

Agree with you here, such a notion does not seem plausible at this time. Whilst I am not sure people could be tortured or killed for it, I certainly don't think many people would have encouraged people with this inclination to 'come out' and #be happy with who they were.

I for one don't like the imposition of modern values and standards onto the past.

Exactly! I'm glad you picked up on what I was trying to say here. :)

Ms. Hawthorne was not pleased with my commentary and her comments sort of spoiled the book for me. Kind of makes it difficult as at this point as I can't think of her work without remembering her remarks.