A Hope at the End of the World by Sarah Lark 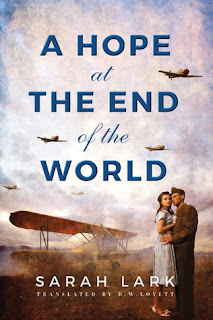 In the chaos of World War II, Polish teenagers Helena and Luzyna Grabowski have lost everything. Without parents or a home, they are shipped to a refugee camp in Persia, where the days ahead hold only darkness. When they hear that orphans are being selected for relocation to New Zealand, Helena is filled with hope—until the officials say they have a place only for her younger sister. On the morning she is to be transported, Luzyna fails to join the chosen group, and Helena takes her place. But the horrors of war—and her guilt at abandoning her sister—follow Helena on the journey across the sea, as a man from her past preys on her fear and remorse. Though the people in New Zealand embrace her, the traumas Helena has suffered threaten her peace and blind her to the devotion of James, a charming, heroic young Allied pilot. If Helena can let go and dare to hope again, she may finally step out of the long shadow of her past to find a future made whole—a new community, a new family, a new love.

The jacket description on Sarah Lark’s A Hope at the End of the World left me positively giddy. I mean, how often do you see historic fiction set in New Zealand? This isn't a base question people, I'm one hundred percent serious. You see, the unfortunate reality is that the big publishing houses have this annoying habit of vetoing everything that isn't a guaranteed sell. If it isn't trending, they ain't biting, and according to the pain-in-the-ass people who dictate the majority of the American market, New Zealand doesn't make the cut. Am I bitter? Just a bit. I want fresh fiction, but mainstream publishers think 'new' means 'risky' and throw those kinds of stories in the grey cylindrical receptacles under their desks to prevent them from ever seeing the light of day. For people like me, this is basically a 'fuck you' and I for one am tired of it.

Enter AmazonCrossing. You read that right folks, I am shamelessly giving a shout out to a publisher, but hear me out. Unlike most of the big houses, this platform is doing great things for new authors and unsung stories by bridging the gap between the old and new markets. Think I'm crazy? Take a closer look at A Hope at the End of the World. Author Sarah Lark was born in Germany and lives in Spain. Her work was translated by D. W. Lovett. Think about that. When was the last time you read a translated fiction huh? I'm willing to bet most of you can tally your total on one hand. I'll grant that WWII fiction is trending at the moment so it's entirely possible that subject matter helped grease some wheels here, but this story intrigued me for a number of reasons and while I know readers hate long winded reviews, I refuse to apologize for hick-jacking my own commentary to say thank you to Lark for writing something unique and thank you to AmazonCrossing for making it possible for a book like Lark's to find its audience.

Getting off my soapbox, I am gonna come right and say that I am not a fan of this cover. The jacket gives me too many fuzzy wuzzies, but in all fairness that vibe is entirely in keeping with the tone of Lark's narrative. A Hope at the End of the World may be set against WWII, but it is first and foremost a romance. Lark touches on some fascinating historical footnotes, but the sweetly chaste relationship between Luzyna and James takes center stage. I personally had a hard time accepting this fact, but I'm a WWII junkie who enjoys witty banter, sarcastic dialogue and intense dogfights. Should I have known what I was getting myself into? Yes. Did it stop me? No. Don't appreciate my comments? Take a number.

Because I know someone will ask, I should probably note that I loved Lark's use of POW camps and the refugee transport to New Zealand. I also thought she made great use of Maori culture and tradition. Though limited in scope, I enjoyed the unique landscape of the novel and was surprised by the appearance of small yet fascinating details such as the wartime experiences of the Neumanns. That said, I found the characterizations one dimensional, the plot twists predictable, and I was decidedly frustrated by how neatly everything was resolved. At the end of the day I don't see myself recommending A Hope at the End of the World as a war fiction, but I would put it out there to those readers who appreciate light historicals and sweet romance.

She noticed a troop transport had arrived in Wellington that day, carrying not refugees but wounded soldiers. They, too, had escaped the war—and probably with brighter hopes for the future than hers.