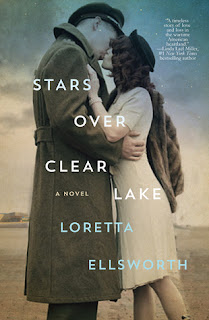 For the first time in decades, Lorraine Kindred has returned to the ballroom where she was swept away by the big bands during the 1940s - and by a star-crossed romance. As she takes in the magnificent energy and brassy sounds of her youth, the past comes to life, along with the fateful decision all those years ago that forced her to choose between personal conviction and social expectations, between the two men who had captured her heart. It had been a time of great music and love, but also of war and sacrifice, and now, trying to make peace with her memories, Lorraine must find the courage to face buried secrets. In the process, she will rediscover herself, her passion, and her capacity for resilience. Set during the 1940s and the present and inspired by a real-life ballroom, Stars Over Clear Lake is a moving story of forbidden love, lost love, everlasting love - and self love. 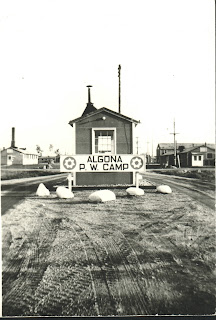 I requested a copy of Loretta Ellsworth’s Stars Over Clear Lake for two reasons: the soldier on the cover and the 1940s reference on the back. I didn’t register the ‘star-crossed’ romance and didn’t give too much thought to the big band references in the jacket description. It was war lit and that was enough for me. Make no mistake, I’m enough of an enthusiast that I’d have read the novel either way, but had I paid more attention I’d have approached the book with a very different expectation.

Lorraine’s story begins in 2007 shortly after the death of her beloved husband. The narrative itself hinges on the identity of her spouse, but if one is a careful reader, there no need to speculate as the author drops an enormous clue in the dialogue of chapter one. Lorraine’s suiters are introduced in chapters two and three, but if the reader is paying attention, there is no contest between them. The end all is crystal clear and that reality made it exceedingly difficult for me appreciate the ‘drama’ that played out in the forty-five chapters that followed.

According to Ellsworth, “Not many people are aware that approximately seven hundred POW camps were scattered across the U.S. during World War II, housing more than four hundred thousand German soldiers by the end of the war.” I’m not sure how true that statement is, I’m a poor judge, but Ellsworth didn’t introduce me to the material. That credit belongs to Bette Greene’s award-winning Summer of My German Soldier, but if young adult fiction isn’t your thing I recommend googling Georg Gärtner. His story made headlines in 1985 and incorporates a lot of the themes Ellsworth attempted to illustrate over the course of her narrative. I don’t mean to nitpick, but I don’t feel the author made the most of the subject matter and felt her descriptions of Germanophobia pale alongside works like Karen White’s The Harvest Season.

To be entirely honest, I wish the author had focused on the Surf Ballroom and omitted the POW camp altogether. The elements don’t mesh well and the references to Glenn Miller, Jimmy Dorsey, Buddy Holly, Ritchie Valens, and J. P. “The Big Bopper” Richardson felt needlessly contrived within the context of the narrative. I liked the material, but I feel Ellsworth’s attempt to tackle both the historic ballroom and the camp at Algona fell flat. There was simply too much material for a single story and I don’t think the final product did justice to either subject.

Long story short, I’d have difficulty recommending this piece. Stars Over Clear Lake boasts a few good ideas, but I felt the combined story lines clashed. The supernatural and historic elements of the story didn't appeal to my tastes and I couldn’t buy into the love triangle Ellsworth created for Lorraine.

I let my gaze wander to the window, where billowy clouds are passing by, reminding me of the clouds that move across the Surf’s ceiling. The ones at the Surf aren’t real clouds, of course; just an illusion, like the ghosts I saw. Except they didn’t look like ghosts. They looked as real as the people standing next to them, laughing and talking. But they weren’t real. They couldn’t be.