Kick: The True Story of JFK's Sister and the Heir to Chatsworth by Paula Byrne 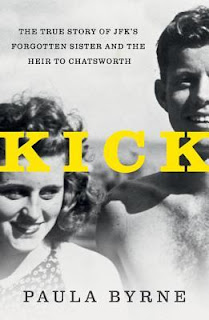 Filled with a wealth of revealing new material and insight, the biography of the vivacious, unconventional—and nearly forgotten—young Kennedy sister who charmed American society and the English aristocracy, and would break with her family for love. Encouraged to be “winners” from a young age, Rose and Joe Kennedy’s children were the embodiment of ambitious, wholesome Americanism. Yet even within this ebullient group of overachievers, the fourth Kennedy child, the irrepressible Kathleen, stood out. Lively, charismatic, extremely clever, and blessed with graceful athleticism and a sunny disposition, the alluring socialite fondly known as Kick was a firecracker who effortlessly made friends and stole hearts. Moving across the Atlantic when her father was appointed as the ambassador to Great Britain in 1938, Kick—the “nicest Kennedy”—quickly became the family’s star. Despite making little effort to fit into British high society, she charmed everyone from the beau monde to Fleet Street with her unconventional attitude and easygoing humor. Growing increasingly independent, Kick would also shock and alienate her devout family by falling in love and marrying the scion of a virulently anti-Catholic family— William Cavendish, the heir apparent of the Duke of Devonshire and Chatsworth. But the marriage would last only a few months; Billy was killed in combat in 1944, just four years before Kick’s own unexpected death in an airplane crash at twenty-eight. Paula Byrne recounts this remarkable young woman’s life in detail as never before, from her work at the Washington Times-Herald and volunteerism for the Red Cross in wartime England; to her love of politics and astute, opinionated observations; to her decision to renounce her faith for the man she loved. Sympathetic and compelling, Kick shines a spotlight on this feisty and unique Kennedy long relegated to the shadows of her legendary family’s history.

I've been to Dealey Plaza and toured The Sixth Floor Museum, but my most interesting experience with Kennedy family history took place in a quiet English cemetery. I was visiting my cousins and we'd pulled over to discuss where to go after walking the grounds at Chatsworth. My sister and I weren't part of the conversation, so while the powers that be worked out a game plan, we opted to take a closer look at a nearby church. As we approached the building, we noted a small sign addressed to American visitors and naturally felt obligated to play our part. We followed the directions to a weather beaten headstone and commemorative plaque. Someone had left a blue bouquet of flowers above the memorial marker honoring President John F. Kennedy's visit, but the grave is what caught my eye and I spent the next evening looking up everything I could find on Kathleen.

Unfortunately for me, there weren't many options. Kathleen Kennedy: Her Life and Times by Lynne McTaggart was the only biography I could find, but reviews indicated Black Diamonds: The Rise and Fall of an English Dynasty by Catherine Bailey had some good information as well. A fictional piece, That Kennedy Girl by Robert DeMaria also existed, but not one of these titles satisfied my curiosity regarding Kick's romance with William Cavendish, Marquess of Hartington. I wanted more insight, but the opportunity didn't arise until 2016 when I landed an ARC of Paula Byrne's Kick: The True Story of JFK's Sister and the Heir to Chatsworth.

Looking back on the book, I can't say that much of the material was new to me, but it was detailed and easy to follow. Structurally I was somewhat confused and more than a little miffed, but that is what it is. The title indicated the book would be about Kick and her relationship with William, but he doesn't make an appearance until page 82. The first third of the book struck me as stock material one could find in any Kennedy family biography as it was dedicated entirely to Kick’s parents and her life before Billy. This begged the question, was Byrne writing about Kick and Billy as the title suggested or is this really Kick's story with footnotes on her famous family as indicated by the cover image which inexplicably features Kick and Jack.

I resigned myself to the latter, but even that didn't pan out. Kick's childhood and youth were dragged out over several chapters, but Byrne pulled a 180 and lumped the last four years of her life into a paltry fifteen pages. The only rationale for this is that Byrne didn't want to feature Kick's subsequent relationship with Peter Wentworth-Fitzwilliam, 8th Earl Fitzwilliam too highly in a book that was supposed to be about her romance with Billy, but that line of thought brought me straight back to my original quandary. Was Byrne writing about Kick and Billy or was she writing about Kick? If the latter, why offer a byline about Chatsworth's heir in the title and why omit intricate detailing of her life after his death?

At the end of the day, Kick: The True Story of JFK's Sister and the Heir to Chatsworth is not a bad biography, but its structure wasn't flawless. I'm not sure how it compares to Kick Kennedy: The Charmed Life and Tragic Death of the Favorite Kennedy Daughter by Barbara Leaming which also released in 2016, but it does offer a significant amount of insight to Kick's life in England and I would definitely recommend it to Kennedy enthusiasts.

Kick wrote to the Dowager Duchess, Billy’s grandmother, telling her that it was her duty to be strong and brave, and that if men like Billy found ‘the courage to die so one must have the courage to live’.