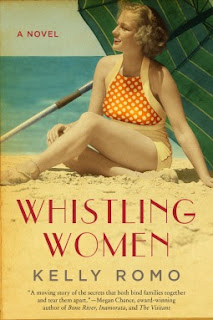 Life went terribly wrong for Addie Bates in San Diego, and she’s been running from dark memories ever since. For fifteen years, the Sleepy Valley Nudist Colony has provided a safe haven for Addie to hide from the crime she committed. But when the residents pack up to go on exhibit at the 1935 world’s fair in San Diego, Addie returns and must face the thrilling yet terrifying prospect of reuniting with her estranged sister, Wavey. Addie isn’t the only one interested in a reunion. When her niece, Rumor, discovers she has an aunt, Rumor is determined to bring her family together. But it’s not so easy when the women are forced to confront family secrets, past and present. Set against the backdrop of the 1935 world’s fair, Whistling Women explores the complex relationships between sisters, the sacrifices required to protect family, and the devastating consequences of a single impulsive act.

I'm not entirely sure what I expected when I requested Kelly Romo's Whistling Women for review. I was attracted to the premise because it sounded 'different' and I liked the idea of reading something a little offbeat, but the reality didn't work as well as I initially hoped.

First and foremost, I didn't care for the characters. Despite possessing a wealth of potential, no member of the cast sparked my attention and/or interest. Beginning to end I felt the characters shuffled across the various scenes, spouting their lines without passion or purpose. In short I was unconvinced and that made it exceedingly difficult to accept the drama they were meant to experience.

The story did pick up round the halfway mark, but at that point I felt it too little too late. The novel was readable, but by the time things started to happen I found I didn't care how it ended. To be perfectly blunt, the novelty had worn itself and my interest had waned. I was already considering my next book and had all but checked out of Addie's story.

That said, the straw that broke the camel's back was the resolution, or rather, the lack there of. The story culminates in a vague conclusion that left me wholly unsatisfied. Maybe it's just me, but I had too many unanswered question and felt the narrative had too many lose ends. The story didn't feel complete and that's not an impression I like having at the end of any novel.

Bottom line, Whistling Women wasn't my cup of tea and I'd have a hard time recommending to other readers.

Addie knew that the expectation was that she go, and she would—if it were anywhere but San Diego. That part of her life had been slammed shut for seventeen years, and she didn’t know if she had it in her to crack it open.