The Traitor's Wife by Allison Pataki 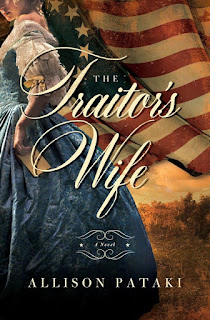 Everyone knows Benedict Arnold—the infamous Revolutionary War General who betrayed America and fled to the British as history’s most notorious turncoat. Many know Arnold’s co-conspirator, Major John André, who was apprehended with Arnold’s documents in his boots and hung at the orders of General George Washington. But few know of the integral third character in the plot; a charming and cunning young woman, who not only contributed to the betrayal but orchestrated it. Socialite Peggy Shippen is half Benedict Arnold’s age when she seduces the war hero during his stint as Military Commander of Philadelphia. Blinded by his young bride’s beauty and wit, Arnold does not realize that she harbors a secret: loyalty to the British. Nor does he know that she hides a past romance with the handsome British spy John André. Peggy watches as her husband, crippled from battle wounds and in debt from years of service to the colonies, grows ever more disillusioned with his hero, Washington, and the American cause. Together with her former lover and her disaffected husband, Peggy hatches the plot to deliver West Point to the British and, in exchange, win fame and fortune for herself and Arnold. Told from the perspective of Peggy’s maid, whose faith in the new nation inspires her to intervene in her mistress’s affairs even when it could cost her everything, The Traitor’s Wife brings these infamous figures to life, illuminating the sordid details and the love triangle that nearly destroyed the American fight for freedom.

I was more than a little excited when I first stumbled across Allison Pataki's The Traitor's Wife. Though familiar with the story of Benedict Arnold's betrayal, I'd never read a fictional account of it and couldn't believe my luck when Howard Books approved my request for an ARC four months before its Feb. 2014 release date.

Looking back on that enthusiasm makes it hard admit, but I'm a reviewer and can't deny this debut wasn't as satisfying as I'd hoped it'd be. Though I enjoyed Pataki's keen understanding of the historic subject matter, the book itself left me confused and bewildered.

Peggy Shippen is the obvious center of this piece which is why I was disappointed with the lack of clarity in her character. There are a handful of moments in which she is as astute as Abigail Adams and as seductive as much speculated widow of Mount Holly, but these are largely overshadowed by episodes of spoiled self-indulgence and pathetically infantile outbursts. Maybe it is just me, but the inconsistency in her manner, personality and personal motivations undermined the authenticity of Pataki's portrayal and often left me wondering if the author had a definitive idea of who this woman was and the role she played in the conspiracy.

I had similar difficulty with Clara. I don't think the audience is ever afforded a real understanding of Peggy's confidant and that made it hard to connect with her on an emotional level. Perhaps I've been spoiled by maids such as Hannah in Philippa Gregory's The Queen's Fool or Barbara in Eva Stachniak's The Winter Palace, but I genuinely feel The Traitor's Wife would be a stronger piece if more effort had been put into developing Clara outside the Shippen and Arnold households.

Characterization issues plagued the supporting cast as well, but I think I've said enough on that particular subject and there is another aspect I want to touch on before wrapping up. The atmosphere, dialogue and values depicted in these pages did not feel authentic to colonial American culture. I don't know if this was an intentional decision meant to benefit Pataki's readers or indicative of the author's inexperience as a writer of historic fiction, but either way I didn't expect to this piece to be quite so theatrical and fluffy.

I recognize I read an ARC edition of The Traitor's Wife and that the finished publication may differ dramatically, but I'm not entirely convinced four months of spit and polish will rectify all of my concerns and though I certainly appreciate the book as light historic fiction, I'm not sure I would recommend it to those looking for a deeply compelling narrative of the conspiracy that might have crushed the revolution and the ambitious dreams of America's founding fathers.

"I reject him once, he teaches himself to walk.” A look of smug satisfaction crossed Peggy’s face. “I reject him again, what do you think he’ll do for me this time?”