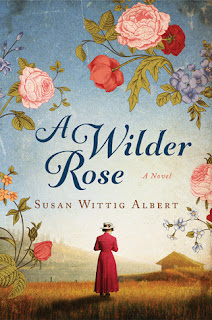 From bestselling, award-winning author Susan Wittig Albert comes the true story of Rose Wilder Lane, who transformed her mother, Laura Ingalls Wilder, from a farmer’s wife and occasional writer into the world-famous author of the Little House books. A Wilder Rose is a novel about of two exceptional women: a mother who has a fascinating pioneer story to tell but lacks the skill to write for publication; and a daughter, a much-published author with the skill to turn her mother’s drafts into memorable books and the publishing connections to get them into print. Set in the Depression, their story is one of painful family conflict and eventual triumph over difficult odds. But why did they conceal their collaboration? And why did Rose not seek recognition for her contributions? Based on Rose’s diaries and letters, A Wilder Rose is a fact-based fiction describing the real events that led to a literary deception that has continued for decades.

I was eight when I read the Little House books. My mother gave me a full set of hard covers and we read them aloud. From time to time I've revisited the material, picking up a biography I happened across or checking out one of the My First Little House Books for my own daughter. I love these stories but even so, I wasn't entirely sold on reading Susan Wittig Albert's A Wilder Rose.

I'd never read the author before so I knew the book would be new ground for me, but the real question was whether or not I wanted anyone to tamper with this story? On one hand, I liked the idea, but on the other, I wasn't sure I could trust an author I'd never heard of. Even after the book arrived in my mail box I felt torn, letting it sit on my side table for a few weeks while I built up the courage to dive in.

Looking back I'm not exactly ashamed of my inhibitions, as stated this is a story dear to my heart, but that being said I love what Albert did with her narrative. Rose is a child at the conclusion of the original series, an important character, but not one we really get to know. Albert rectifies this in her work, giving readers an opportunity to understand the person she became and the mountains she climbed. I don't mean to downplay the complex relationship she shared with her mother or their difficult collaborative effort to get the famous series published, but I found Rose's experiences the most powerful aspect of this piece.

Rose Wilder Lane was a woman ahead of her time. A journalist, travel writer, novelist, political theorist and ultimately, the force that made her mother's books a tangible reality. Albert captures and brilliantly recreates her spirit within these pages, crafting a poignant depiction of the fiercely independent woman whose story has been overshadowed by the legacy she helped create.

An absolute must read.

Had she succeeded in any of it, in anything she had ever wanted to do? No, not in what she had planned or in the way she had planned. But there was the forsythia, as golden as the sun, outside her own window, and over her head, the roof of her own little house.