The Midwife's Tale by Sam Thomas 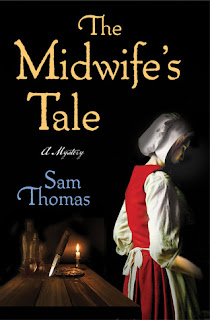 It is 1644, and Parliament’s armies have risen against the King and laid siege to the city of York. Even as the city suffers at the rebels’ hands, midwife Bridget Hodgson becomes embroiled in a different sort of rebellion. One of Bridget’s friends, Esther Cooper, has been convicted of murdering her husband and sentenced to be burnt alive. Convinced that her friend is innocent, Bridget sets out to find the real killer. Bridget joins forces with Martha Hawkins, a servant who’s far more skilled with a knife than any respectable woman ought to be. To save Esther from the stake, they must dodge rebel artillery, confront a murderous figure from Martha’s past, and capture a brutal killer who will stop at nothing to cover his tracks. The investigation takes Bridget and Martha from the homes of the city’s most powerful families to the alleyways of its poorest neighborhoods. As they delve into the life of Esther’s murdered husband, they discover that his ostentatious Puritanism hid a deeply sinister secret life, and that far too often tyranny and treason go hand in hand.

One my favorite aspects of this title appears in the Author's Note where Thomas' discloses the piece was inspired by the will of a real life midwife. His mystery is of course fiction, but Thomas' character was so vividly imagined, so tangible and authentic on the page, I just get a kick out of knowing she was based on someone who actually existed and commend Thomas for being able to so convincingly recreate the some of her spirit in his work.

Of course, Thomas' ability to create such wonderful characters wasn't the only impressive feature of his debut novel. I was also struck by how well-written the book is. Often I come across writers who rely on shock and awe to keep the reader's interest but Thomas' plot has a fluid and steady rhythm I greatly appreciate and I am not used to seeing in unseasoned authors.

An assistant history professor so it should come as no surprise that Thomas did his homework when it came to researching this piece, but what caught my attention was the manner in which he incorporated his research into the novel. There are no drawn out expositions in the book. No weighty passages stuffed with names, dates and trivia. Instead Thomas relies on subtle details to create a sense of life in the seventeenth century, things you hardly even notice as they are so appropriate to the telling they never disrupt the narrative.

The Midwife's Tale is not the most complicated mystery I have ever read, but the book is certainly one of the most fascinating historic pieces I've happened across. A beautifully crafted story that isn't to be missed.

She is my friend and I am her midwife, so I cannot abandon her. I am the only chance she has to escape burning for a crime she says she did not commit.

Tuesday, January 8
Review & Giveaway at Peeking Between the Pages

Thursday, January 24
Review at Book Dilettante
Review at Confessions of an Avid Reader

Tuesday, January 29
Feature & Giveaway at Passages to the Past

Wednesday, January 30
Review at The Bookworm
Review & Giveaway at Oh, for the Hook of a Book!

Thursday, January 31
Review at Book of Secrets
Review at Sharon’s Garden of Book Reviews
Review at The Musings of ALMYBNENR

Friday, February 1
Review at Reading the Past
Review at Impressions in Ink

I've seen this on so many blogs and I really want to read it!