The Phantom of Valletta by Vicki Hopkins 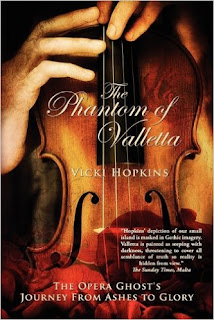 Another chapter in the life of the infamous Phantom of the Opera, as penned by Gaston Leroux, continues when he leaves Paris and moves to Malta in search of a new beginning. Clothed in secrecy, he purchases The Royal Opera House in Valletta, which has been destroyed by a devastating fire. In an attempt to bury the pain of his past, the burned-out shell becomes his new obsession. He is determined to resurrect the structure from ashes and return it to glory. To raise funds for his task, he holds a masquerade and encounters a strange woman who prophesies his destiny of undoing and death. Her words haunt the Opera Ghost, but he continues on his path of restoration. After years of hard work, the gala reopening occurs. The Phantom is convinced he has reached the pinnacle of success in his life. He rests in peace over his accomplishments. For sheer amusement, he takes on a new student, which leads him down a path of romance, mystery, and danger. His fortune unfolds before him, and he discovers he cannot hide from those who seek retribution for his former sins. He is forced to reap the consequences and comes face-to-face with his darkest demons and fears. In the end, his insatiable hunger for beauty is challenged to the core. Will he survive the obstacles he encounters or will this finally be his undoing and death? 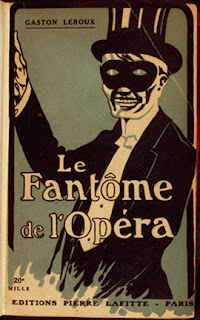 Kindle freebies carry a certain stigma. The titles are believed poorly written and horribly edited. It is sad but by and large I can’t disagree with the perception. My kindle library is littered with free lit, most of which I can’t claim to have particularly enjoyed. The Phantom of Valletta is an exception. I have my criticisms but they are of little consequence. Hopkins’ work is fabulous.

Admittedly, my initial feelings were far different. I couldn’t wrap my head around a book told from Erik’s point of view. I like the Phantom’s dark enigmatic persona. Leroux doesn’t disclosure the full history of his character and I believe that is why after more than a hundred years the Ghost still captures our interest. He is a mystery, never fully explained.

Being inside his head, essentially wearing the mask stripped Erik of his secrets. I wasn’t disappointed exactly, more like disenchanted. There is nothing inherently wrong with Hopkins’ interpretation but sometimes less is more. Sometimes it is not what we know but what we don’t know that leaves a greater impact.

The book really takes off with the introduction of Desiree. Again I was hesitant. The idea of Erik tutoring and molding the talents of another female student seemed repetitive and trite but I was wrong. The private young woman breathes life into the story almost the moment she appears. It is through her that Hopkins’ talent shines.

Valletta’s Royal Opera House provides a breathtakingly beautiful backdrop for the continued story of the Opera Ghost and the plot is wonderfully constructed. Once the story takes off it simply doesn’t let you go. My only real complaint is the hasty ending. Every other aspect takes time to develop allowing the reader to digest it but the final scene is feels more like a drive by.

Sadly, The Phantom of Valletta is no longer free to download but the book is more than worth looking into. For fans of the story, this one is not to be missed.

Erik enjoyed playing a game of chess with the lives of others around him. He did so to his own advantage, smugly proud of how well he could manipulate the paths of unsuspecting people to achieve an end.

Hmmm, intersting. I'm not familiar with the original Phantom (in any of its reincarnations), but the idea of an alternate-POV retelling is interesting.

Thanks for the review!

You're welcome. Glad you liked it.

I read Gaston Leroux's Phantom years ago when the Broadway musical first played. There's something so compelling about the Phantom and I agree that Leroux didn't quite capture him as well as he could have. Your review has my interest peaked for this one and I think I will check my library. Love your photo of Gerard's Phantom. I thought he did a fantastic job in the film.

I love the 2004 version of Phantom. It is the most visually appealing and I love the cast. My only complaint is that I think the make-up department could have been more creative with Erik's deformity. He looked more like a burn victim than a side show freak.