Tamer of Horses by Amalia Carosella 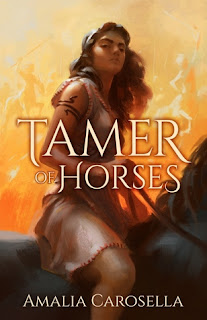 Abandoned as a baby, Hippodamia would have died of exposure on the mountain had it not been for Centaurus. The king of the centaurs saved her, raised her as his own, and in exchange asks for only one thing: she must marry the future king of the Lapiths, Pirithous, son of Zeus, and forge a lasting peace between their peoples by giving him an heir. It would be a fine match if Pirithous weren’t more pirate than king and insufferably conceited, besides. But Hippodamia can hardly refuse to marry him without betraying every hope her people have for peace.After the death of Dia, queen of the Lapiths, tensions are running high. The oaths and promises protecting the Lapith people from the Myrmidons have lapsed, and the last thing Pirithous needs is to begin his kingship by making new enemies. But not everyone wants peace on the mountain. There are those among the centaurs who feel it comes at too high a price, and Peleus, King of the Myrmidons, lusts for the lush valley of the Lapiths and the horses that graze within it. Pirithous needs a strong queen at his side, and Hippodamia will certainly be that—if he can win her loyalties. But no matter their differences, neither Hippodamia nor Pirithous expected their wedding banquet to be the first battle in a war.

Tamer of Horses has been on my list since I hosted a Character Conversation with Polypoetes. It was mentioned that he’d appear in a forthcoming novel and I set myself to keeping an eye out for Carosella’s next release. Lucky for me, I didn’t have to wait long. Three months later I was granted an ARC of the novel and I jumped straight in.

As far as heroines go, Hippodamia is a breath of fresh air. She has tomboyish mannerisms and a great love of horses, but her real motivation is a simple desire to be loved. She wants a husband and a family and I found her modest ambitions both endearing and relatable, especially in a world where glory and immorality reign supreme. She was a very genuine woman in my mind’s eye and I loved how Carosella managed to keep that fundamental element of her character at the forefront of her arc.

Much like his immortal father, Pirithous is an intensely sexual being and it would have been very easy to tire of his appetites, but Carosella plays his prowess against his insecurities and the end result is surprisingly charming. The jealousy he feels towards Eurytion and Antiope soften him and I enjoyed the dimension his flaws afforded. I also appreciated the idea that those same failings eventually drive him to become a better version of himself, but you’ll have to read to book to fully understand what I mean.

The politics of war for the Lapiths fascinated me from the start and I loved how the cultural struggle between the Lapiths and the centaurs heightened the tension throughout the narrative. I was impressed with the role the Gods played in the lives of Carosella's mortal cast and I fell head over heels in love with Antiope, but the moment that stands out in my mind is the final scene. Hippodamia’s sacrifice is profound, but the fact that her worth is truly understood in that moment bring the novel full circle and cuts straight to the heart.

Long story short, I loved every minute I spent with Tamer of Horses and highly recommend it to fellow readers of myth based fiction.

“A woman who earned her name taming horses ought not be kept from them, Princess. Surely you did not think me so foolish as that?”

Passages to the Past said...

Oh wow, great review, Erin! I am totally picking this one up, I love Amalia's books!

Those Greek gods seem to have spent a lot of time abducting or seducing pretty girls. Them again, Norse Mythology is even more Crazy....

Interesting incorporation of a lesser known figure though. I would be very tempted to do that if I ever write fiction. I really want to put Archbishop Stephen Langton and Robert Grosseteste in a book. Not the same book though......