In Another Life by Julie Christine Johnson 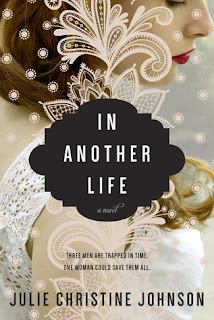 Historian Lia Carrer has finally returned to southern France, determined to rebuild her life after the death of her husband. But instead of finding solace in the region's quiet hills and medieval ruins, she falls in love with Raoul, a man whose very existence challenges everything she knows about life--and about her husband's death. As Raoul reveals the story of his past to Lia, she becomes entangled in the echoes of an ancient murder, resulting in a haunting and suspenseful journey that reminds Lia that the dead may not be as far from us as we think. Steeped in the rich history and romantic landscape of rural France, In Another Life is a story of love that conquers time and the lost loves that haunt us all.

Julie Christine Johnson’s In Another Life was a hard book for me. I liked the idea and found the tone reminiscent of M.J. Rose’s novels, but it took ages for me to get into the story and, taken as a whole, I find that fact impossible to ignore.

Johnson’s rich prose is impossible to criticize and I loved how atmospheric the novel felt, but I found the structure of the story incredibly fractured. I hate to be blunt, but I struggled with how Johnson approached the dual timeline and felt the manner in which she moved between past and present made the story difficult to follow and absorb.

The pacing presented another hurdle for as I felt the novel’s momentum was often stalled by historical exposition. The information itself is testament to Johnson’s dedication to research and I adore the author’s enthusiasm, but I felt the sheer volume of fact overwhelmed the fictional elements of the finished narrative.

Looking back, I find that I have a lot of unanswered questions regarding the mechanics of what exactly transpires. It’s all rather mystifying I think the novel might have been stronger if the author had elaborated on the supernatural natural elements of the story in greater detail. I don’t mean to sound overly critical, but the concepts were too vague for my liking and the gaps left me at a bit of a loss.

Did I enjoy the time I spent reading In Another Life? Yes. I struggled with elements of its construction, but I enjoyed the story Johnson told and see myself recommending her work as a light and imaginative romance.

The bag over Lia’s shoulder contained two letters. Both had been written in that terrible year between December 1207 and December 1208, when Languedoc fell on the blade of a sword and split open into war. One letter warned of evil; the other offered safe passage to a woman and her children. Betrayal and forgiveness. The past not forgotten, the future in the form of new life.