Enchantress of Paris: A Novel of the Sun King’s Court by Marci Jefferson 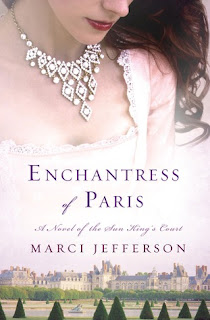 Fraught with conspiracy and passion, the Sun King's opulent court is brought to vivid life in this captivating tale about a woman whose love was more powerful than magic. The alignment of the stars at Marie Mancini's birth warned that although she would be gifted at divination, she was destined to disgrace her family. Ignoring the dark warnings of his sister and astrologers, Cardinal Mazarin brings his niece to the French court, where the forbidden occult arts thrive in secret. In France, Marie learns her uncle has become the power behind the throne by using her sister Olympia to hold the Sun King, Louis XIV, in thrall. Desperate to avoid her mother's dying wish that she spend her life in a convent, Marie burns her grimoire, trading Italian superstitions for polite sophistication. But as her star rises, King Louis becomes enchanted by Marie's charm. Sensing a chance to grasp even greater glory, Cardinal Mazarin pits the sisters against each other, showering Marie with diamonds and silks in exchange for bending King Louis to his will. Disgusted by Mazarin's ruthlessness, Marie rebels. She sacrifices everything, but exposing Mazarin's deepest secret threatens to tear France apart. When even King Louis's love fails to protect Marie, she must summon her forbidden powers of divination to shield her family, protect France, and help the Sun King fulfill his destiny.

I got excited about Marci Jefferson's Enchantress of Paris the moment I learned its release date. I'd fallen in love with Girl on the Golden Coin: A Novel of Frances Stuart in 2013 and had high hopes for the author's sophomore release. I knew nothing about Marie Mancini or Cardinal Mazarin, but I was excited at the prospect and eagerly anticipated watching the unfamiliar story unfold under Jefferson's pen.

Did the book live up to my expectations? Yes and no. There were a lot of things I loved about the story, but I'd be lying if I didn't admit the time I spent with this particular narrative left mixed impressions in its wake.

Like many of my fellow reviewers, I fell for Jefferson's heroine. Marie is intelligent, passionate, romantic, and tenacious, but my favorite aspect of her being is that she is vulnerable. This is a seventeenth century woman, but the flaws Jefferson incorporated in her characterization make Louis' mistress empathetic, engaging and relatable.

I've not spent much time on fictional accounts of the Sun King, but I thought Jefferson's interpretation of Louis XIV equally noteworthy. Young and idealistic, he is portrayed as a monarch still growing into the duties and responsibilities of his position. He is unsure of himself and easily manipulated, but his growing confidence endears him to the reader and gives them reason to overlook, or at least accept, his personal shortcomings.

I enjoyed the politics Jefferson folded into the narrative as well as the social drama experienced by her cast. I felt the multiple allegiances, rivalries and ambitions depicted within these pages authentically convoluted and appreciated the effort that went into crafting such a tangled web of pretension and purpose. I also thought the novel convincingly atmospheric and savored the descriptive details scattered throughout Marie's story.


That said, there were several elements I thought might have been stronger if they'd been more fully developed. I liked the ambiguity of the magic depicted within these pages, but I was disappointed at how thoroughly the theme faded as the story progressed. Marie's maid Morena fascinated me, but her character arc ultimately felt incomplete, unfinished and fragmentary in my eyes.

Olympia, Hortense and Marianne boasted similar potential, but despite their fascinating and controversial legacies, the trials of Marie's sisters go virtually unacknowledged. Don't misunderstand, I truly adore the story as written, but I couldn't help wishing she'd spotlighted the girls as Perinot did Marguerite and Eleanor in Sister Queens or Quinn did Cornelia, Lollia, Diana, and Marcella in Daughters of Rome.

Do I regret the time I spent on Enchantress of Paris? Hardly. Jefferson is a gifted storyteller and I adore the fiction she crafted. I believe more could have been done with the material, but I've no complaints of what appears within these pages and look forward to her next release.

“He must be convinced subtly, and that will take time. But when I'm ready to tell the king what I know, it will shake the very foundations of Paris.”