Teresa of the New World by Sharman Apt Russell 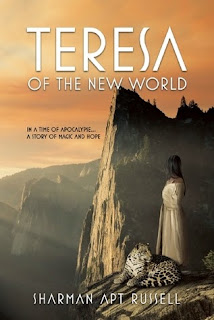 In 1528, the real-life conquistador Cabeza de Vaca shipwrecked in the New World where he lived for eight years as a slave, trader, and shaman. In this lyrical weaving of history and myth, the adventurer takes his young daughter Teresa from her home in Texas to walk westward into the setting sun, their travels accompanied by miracles--visions and prophecies. But when Teresa reaches the outposts of New Spain, life is not what her father had promised. As a kitchen servant in the household of a Spanish official, Teresa grows up estranged from the magic she knew as a child, when she could speak to the earth and listen to animals. When a new epidemic of measles devastates the area, the sixteen-year-old sets off on her own journey, befriending a Mayan were-jaguar who cannot control his shape-shifting and a warhorse abandoned by his Spanish owner. Now Teresa moves through a land stalked by Plague: smallpox as well as measles, typhus, and scarlet fever. Soon it becomes clear that Teresa and her friends are being manipulated and driven by forces they do not understand. To save herself and others, Teresa will find herself listening again to the earth, sinking underground, swimming through limestone and fossil, opening to the power of root and stone. As she searches for her place in the New World, she will travel farther and deeper than she had ever imagined. Rich in historical detail and scope, Teresa of the New World takes you into the dreamscape of the sixteenth-century American Southwest.

I’m not sure what prompted me the tackle Teresa of the New World by Sharman Apt Russell, but I’m very happy I took the chance. The book is different, but I greatly enjoyed the scope and artistry of the piece.

Russell flirts with both spirituality and history over the course of Teresa’s story and while I would definitely classify it as a young adult piece, I think it has certain appeal for more mature readers as well. In terms of content, I liked how Russell painted the indigenous people and the balance she struck between fact based material and the more fantastic elements of the story.

I don’t consider myself a particular fan magical realism, but Russell makes it work. The end result falls far outside my regular stomping grounds, but proved well worth the time I spent with it.

Rain bagan to fall in earnest. The raven flapped and flew to the hole in the grass roof. Water greening the thorn forest, water rushing to sea, a power, a magic rushing through everything, everyone and everything, each day bringing its own amazement.