The Hesitant Heiress by Dawn Crandall 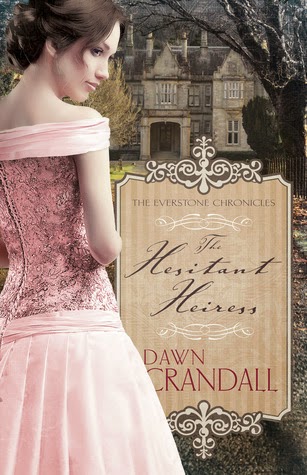 After being unjustly expelled from the Boston Conservatory of Music, Amaryllis Brigham sees her dreams of founding a music academy disappearing before her very eyes. Now the only way to achieve her goal comes with high stakes for someone set on avoiding men as much as possible: marry within the year to inherit her grandmother’s fortune. Amaryllis reluctantly takes part in her aunt’s society, intent on getting to the west coast on her own... and without a husband. Despite her own misgivings, she soon finds herself falling in love with the most unlikely of men, Nathan Everstone, whose father not only had a part in her expulsion, but whose ominous presence has haunted her dreams for a decade since her mother’s tragic death. Nathan turns out to be much more than he seems and everything she never knew she wanted. But just as everything Amaryllis has recently hoped for comes to fruition, it all falls apart when she finds that the real culprit who has been managing her life isn't who she thought at all.

I'll be the first to admit I was uncertain about accepting Dawn Crandall's The Hesitant Heiress for review. My record is hit and miss with Christian fiction and I tend to favor stories with darker material, but I pride myself on stepping out of my comfort zone from time to time and something about the Everstone Chronicles prompted me to take a chance.

So what did I discover? Well to be brutally honest, I found something I'd not expected, an engaging and rather delightful story of conviction, personal introspection and light romance. Crandall rocked the first person narrative and I while I often found myself at odds with her characters, I can't deny my appreciation for the style and tone of her work.

I liked the direction of the story and was impressed with the author's use of religion. Experience has taught me that many writers have difficulty finding balance between faith and fiction, but in this, Crandall proved an exception. Her use of religion makes sense in the framework of Amaryllis' story and never struck me as abrasive or heavy-handed.

The story takes a while to get going and I wish it had been more focused on Amaryllis and Nathan, but I've few complaints over the time I spent with The Hesitant Heiress. Crandall brings a nice level of intrigue to the table and while I felt the ending predictable, I liked the twists and turns that transpired between points a and b.

“It is, in fact, that I've never admired anyone as much as I admire you. I have such a strong affinity for you. And only God knows why, for you're the most irritatingly, self-protective young lady I've ever met.”

Thanks for taking a chance on me and The Everstone series, Erin! :)