Mist of Midnight by Sandra Byrd 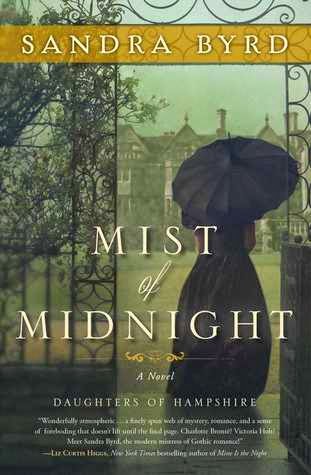 In the first of a brand-new series set in Victorian England, a young woman returns home from India after the death of her family to discover her identity and inheritance are challenged by the man who holds her future in his hands. Rebecca Ravenshaw, daughter of missionaries, spent most of her life in India. Following the death of her family in the Indian Mutiny, Rebecca returns to claim her family estate in Hampshire, England. Upon her return, people are surprised to see her… and highly suspicious. Less than a year earlier, an imposter had arrived with an Indian servant and assumed not only Rebecca’s name, but her home and incomes. That pretender died within months of her arrival; the servant fled to London as the young woman was hastily buried at midnight. The locals believe that perhaps she, Rebecca, is the real imposter. Her home and her father’s investments reverted to a distant relative, the darkly charming Captain Luke Whitfield, who quickly took over. Against her best intentions, Rebecca begins to fall in love with Luke, but she is forced to question his motives—does he love her or does he just want Headbourne House? If Luke is simply after the property, as everyone suspects, will she suffer a similar fate as the first “Rebecca”? A captivating Gothic love story set against a backdrop of intrigue and danger, Mist of Midnight will leave you breathless.

Author Sandra Byrd has been in my tbr for a while and though I own two of her earlier novels, Mist of Midnight marks my first taste of her work and I'm happy to report I found the experience quite enjoyable.

First and foremost, I really liked how Byrd used identity theft in the context of this story. I'm used to seeing 19th century murder mysteries and I thought impersonation a fun and refreshing departure from that norm. The pacing was a little slow for me personally and I predicted the ending long before the final page, but I liked how Byrd cast suspicion on multiple characters and how she played with ambiguity over the course of narrative.

Mist of Midnight is marketed as Christian lit, but Byrd's religious themes are subtle at best and she never allows faith to overwhelm the story. She's not at all preachy and that really appealed to me as a reader. I was also drawn to the blend of culture she incorporated in the fabric of the novel and the contrast she illustrated between Rebecca's life in India and her efforts to find her place in England.

Though set in different eras, I think Mist of Midnight makes a nice companion to The Masque of a Murderer by Susanna Calkins and would easily recommend its author alongside Julie Klassen and Roseanna M. White.

Peace and happiness. Security. All that was mine until the Indian mutineers rode in; they said they wanted to reclaim their land, we said we were innocent: sent to serve, not steal. There was truth and misunderstanding on both sides. They’d killed my parents, they’d smothered my hopes. Instead of robbing me of my dreams...

I'm glad I finally got to share a book with you, Erin, and glad, too, that you enjoyed it. Thank you for taking the time to read Mist of Midnight, and for crafting and posting a truly thoughtful review!