The Fortune Hunter: A Novel by Daisy Goodwin 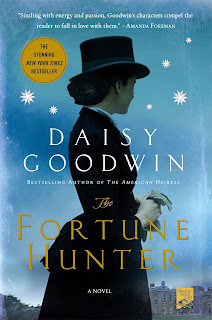 In 1875, Sisi, the Empress of Austria is the woman that every man desires and every woman envies. Beautiful, athletic and intelligent, Sisi has everything - except happiness. Bored with the stultifying etiquette of the Hapsburg Court and her dutiful but unexciting husband, Franz Joseph, Sisi comes to England to hunt. She comes looking for excitement and she finds it in the dashing form of Captain Bay Middleton, the only man in Europe who can outride her. Ten years younger than her and engaged to the rich and devoted Charlotte, Bay has everything to lose by falling for a woman who can never be his. But Bay and the Empress are as reckless as each other, and their mutual attraction is a force that cannot be denied. Full of passion and drama, THE FORTUNE HUNTER tells the true story of a nineteenth century Queen of Hearts and a cavalry captain, and the struggle between love and duty.

There aren't many novels available to those interested in the nineteeth century Austo-Hugarian Hapsburgs so I was understandably ecstatic to learn that author Daisy Goodwin was fictionalizing a chapter of their complex history. I’m not exaggerating, there was some pretty embarrassing fangirl-like squealing the day I got my hands on The Fortune Hunter and that is not something I admit lightly.

So what happened? How did a piece that generated so much initial enthusiasm garner a paltry two star rating? I'll be happy to explain, but you might want to make yourself comfortable and I urge you to proceed with caution as illustrating my opinion requires references that may spoil your experience with the novel.

Looking back on The Fortune Hunter, I can't deny a certain admiration for Goodwin's portrayal of Bay, Charlotte, Caspar, Queen Victoria, John Brown, Augusta, Fred, Chicken and even the unfortunate Major Postlewaite. I think Miss Baird's passion for photography a stroke of genius and I loved watching the whirlwind of emotional drama inflicted on poor Middleton. Unfortunately, I don't feel these strengths outweighed the weaknesses I noted in the novel's tone, structure and accuracy.

The cover art features a woman clearly meant to represent the Empress against a night sky augmented with the star jewels made famous in Winterhalter's 1865 portrait. Paired with the jacket description I anticipated a story that would center on Elisabeth and was shocked to discover her character featured less prominently than her dashing cavalry captain and his devoted fiancée.

More important though, was the fact that I felt genuine affection between the younger couple and never considered Elisabeth a threat to their happiness. Personally I found the Empress the weakest point in Goodwin's exaggerated triangle and even after finishing the book can't claim to understand what the author was trying say with her character.

Questions in the accuracy of Goodwin's work arose when I noticed the only resource she cites is the less than faithfully adapted 1977 ballet, Mayerling, but I became genuinely concerned in chapter twenty-nine, The Widow of Windsor, when the Empress and Queen Victoria shared a spirited exchange of veiled insinuations.

‘Empresses and grandmothers. We stand alone on the World Stage, dear Elizabeth.’ Victoria was at her most gracious.
'But you are superior to me in this way as in every other. I only have one grandchild,’ said Sisi. 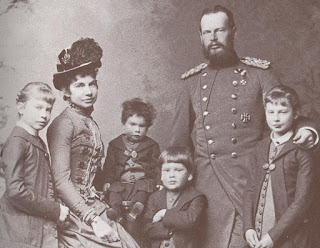 Sisi's eldest surviving child, Archduchess Gisela of Austria married Prince Leopold of Bavaria in 1873. In January 1874, Gisela gave birth to Princess Elisabeth Marie. A second daughter, Princess Auguste, was born in April of 1875. Goodwin's The Fortune Hunter takes place in July of '75 which would make Sisi a grandmother twice over during the course of the novel, a fact which clearly contradicts the fictional barb Elisabeth delivered Queen Victoria.

Chapter thirty-one finds Elisabeth and Bay discussing the mail they received on their return to Easton Neston, but a casual remark towards the end of their dialogue raised another red flag.

Bay looked up, surprised. Sisi hardly ever mentioned her children. He had assumed it was from some delicacy about their situation.
‘I don’t know if he will come here. Rudolph doesn’t care for hunting.’


This is fiction and while I respect that personality traits are subjective, this seems like a pretty outlandish conclusion considering the historic evidence.

Posed on a hunting trip with his father, a colored pencil self-portrait depicting a shooting excursion, a sketch documenting a kill at Salzkammergut, standing over his first bear at Görgeny St. Imre, a stag hunt he attended with his wife, and an official portrait dressed in his winter shooting attire. Rudolf committed suicide at his private hunting lodge in 1889 so asking him is impossible, but you tell me, does this look like someone averse to hunting?

My ears perked again in chapter thirty-two when Bay visits London to attend a photography exhibition in support of Charlotte.

"He glimpsed a profile in the carriage, and until its owner turned and Bay saw the luxurious moustache, he thought for an uncomfortable moment that the Empress had abandoned the Cottesmore to follow him to London. Then the owner of the moustache lit a small cigar and Bay saw it was a young man not much more than a boy." 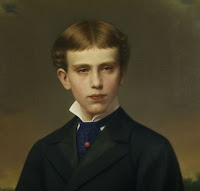 The boy is Elisabeth's seventeen year old son, but the physical description of the young man bothers me as the Crown Prince is quite clearly sans facial hair in his 1875 portrait.

Analysis of photographs, paintings and sketches of the Hapsburg heir show that he didn't actually sport a moustache until the early 1880s, well after The Fortune Hunter concludes.


Goodwin continued to play fast and loose into the final chapters, a habit I found severely detrimental to novel's climax.

Halfway down the list of jockeys was Middleton, J.M. riding Tipsy (grey).  She felt the jolt of seeing his name in print and realised that she had no idea what his initials stood for.


Charlotte and I have a lot in common. Bay's full name is William George Middleton.

‘We won, Empress! We won. We must have champagne.’
‘But, I think it was Captain Middleton who won,’ said Sisi.


The winners of the 1875 Grand National were not Bay Middleton and Tipsy. That honor belongs to jockey Tommy Pickernell and a horse named Pathfinder. Researching that detail also revealed the race took place in March, not July.

Someone from the crowd started to sing ‘Daisy, Daisy, give me your answer do’


Daisy Bell, the song to which these lyrics belong, wasn’t written until 1892, which is coincidentally the same year Bay Middleton met his death.


By the end of my reading I was so disillusioned that I couldn't care a whit for Goodwin's finale. I wanted only to be done so I could move on to my next read with a clear conscious. If Goodwin explained herself in the author's note I might have made allowances for the liberties she assumed, but my ARC bears no such justification and at the end of the day, that oversight hurts more than any other and leaves such a poor impression that I can't see myself recommending The Fortune Hunter forward.

He wanted to have another look at the photograph of him and the Empress. It wasn't that he had forgotten the image. It was in the hoped that his recollection of the picture was somehow faulty. The glimpse he had got had been terrifying. He had barely recognised himself. The man in the picture was not someone he wanted to be: transfixed by the Empress, eyes wide with desire and - he could barely admit it - greed.

Great review. I think authors must realize the impact of fictionalizing historical people and events. Research is imperative and can break a plot.

The race is the big one. Goodwin's entire story hinges on what happens at the Grand National, but she fabricated the entire thing. I understand small changes and again, if she'd explained herself I might have a different opinion, but as it stands I don't see that the piece holds much value. :(