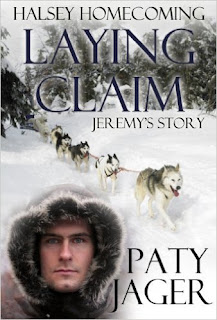 Halsey Homecoming Trilogy is the on-going saga of the Halsey Brothers Series. Jeremy Duncan commits to haul one last load of supplies across the great interior of the Yukon before heading home. But, he has to trade his pack animals for sled dogs and leave Skagway in the middle of a blizzard due to one strong-willed, business-minded beauty. Determined to find her older brother, Clara Bixbee doesn't care how she gets across the pass, as long as she does, and soon. Hiring handsome pack guide Jeremy Duncan seems to be her best choice. Especially after she saves a young girl being beaten by the local gang leader and needs to escape Skagway fast. This book has explicit love scenes.

I have a lot of mixed thoughts about Paty Jager's Laying Claim so please bear with me while I attempt to everything down. Consider this your warning folks, there be spoilers ahead.

Being of independent mind, Clara Bixbee is an atypical female for the period, but she isn't what you'd call a gung-ho outdoorswoman. Vulnerable and ill-prepared, she suffers through a very emotional adjustment period as she acquires the skills necessary to survive daily life in the Klondike. While some readers might see her as "whiny" or "prissy", I personally liked this aspect of Jager's heroine and think it much more realistic than a sheltered silk stocking who is inexplicably adept at roughing it over some of the most hazardous terrain in the world.

Jeremy Duncan, on the other hand, is a straight up bore. A veritable saint, I found nothing in his makeup that piqued even the smallest degree interest. Presented as the only honorable gentleman in Alaska, I found his character cheesy, predictable and dull.

The first half of the story had wonderful balance between the historical and romantic elements of the piece, but period detail fades into obscurity during the latter chapters of the narrative... and by period I mean fact based description, not menstruation, which Jager covers in an incredibly awkward bath scene, but I'll get back to that in a minute. I picked up Laying Claim because it was set during the Klondike Gold Rush, but ultimately feel the event didn't play enough of a role to justify my interest.

Now before I forget, let's get back to that bath scene. What was the point? We already know Jeremy will bend over backwards for Clara and that the time he spent with his sister taught him a lot about women. We really didn't need to further illustrate the point with his volunteering to clean the scarlet evidence of her menstrual cycle while she stands there on the verge of tears, dripping pink - you read that correctly - pink bathwater on the floor. Not sweet, not endearing, and not sexy. Really, really, not sexy.

More disconcering than that, however, is the story's structure. There is no closer to the Soapy Smith storyline, Clara's rescuing of the prostitute in Skagway is similarly pointless, and I'm am still trying to figure out what the hell happened with Randy Bixbee. Clara spends the entire novel trying to find her brother in hopes of saving the family business and when her goal is finally realized, Jager treats it like a south side drive-by before topping it off with a rushed and foolishly contrived finale.

The initial chapters of Laying Claim inspired early optimism, but the book takes a downward spiral round about the halfway mark and never truly recovers. Disappointed as I am with the time I spent on this one, I think it goes without saying that I'd have great difficulty recommending it to others.

"It’s different. You’re my employer. I’m doing my job making sure you get to your brother.” Yes, all the things she’d mentioned he had done, but always with the end thought of getting her safely to her brother. You can try and fool her, but you know you touch her more than is proper. He mentally pummeled the voice in his head. Her kiss still lingered on his lips. He did crave her nearness. It has to stop! But I’m not letting any other man touch her.