Girl on the Golden Coin: A Novel of Frances Stuart by Marci Jefferson 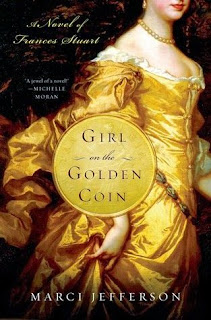 Impoverished and exiled to the French countryside after the overthrow of the English Crown, Frances Stuart survives merely by her blood-relation to the Stuart Royals. But in 1660, the Restoration of Stuart Monarchy in England returns her family to favor. Frances discards threadbare gowns and springs to gilded Fontainebleau Palace, where she soon catches King Louis XIV’s eye. But Frances is no ordinary court beauty, she has Stuart secrets to keep and people to protect. The king turns vengeful when she rejects his offer to become his Official Mistress. He banishes her to England with orders to seduce King Charles II and stop a war. Armed in pearls and silk, Frances maneuvers through the political turbulence of Whitehall Palace, but still can’t afford to stir a scandal. Her tactic to inspire King Charles to greatness captivates him. He believes her love can make him an honest man and even chooses Frances to pose as Britannia for England’s coins. Frances survives the Great Fire, the Great Plague, and the debauchery of the Restoration Court, yet loses her heart to the very king she must control. Until she is forced to choose between love or war. On the eve of England’s Glorious Revolution, James II forces Frances to decide whether to remain loyal to her Stuart heritage or, like England, make her stand for Liberty. Her portrait as Britannia is minted on every copper coin. There she remains for generations, an enduring symbol of Britain’s independent spirit and her own struggle for freedom.

I was very nervous about picking up Marci Jefferson's Girl on the Golden Coin, not because it is a debut, but because the book has been hyped to such an extent that I feared an experience similar to the one I had with Kate Alcott's The Dressmaker. My worry was so real that I actually considered holding off a while when I received an ARC edition of the book for review.

Doing my best to ignore my apprehension, I ultimately decided waiting would only delay the inevitable and so I dove in, hoping my concern would dissipate in short order. It was a hope that was quickly fulfilled and I soon found myself enamored with the story of Frances' life in the glittering opulence of both the French and English courts.

Girl on the Golden Coin has much to commend it, but my favorite aspect of this piece was how Jefferson approached the women in Charles' life. Frances Stuart, Lady Castlemaine and Catherine of Braganza are individually distinct personalities which made it relatively easy to understand why Charles might have been drawn to each, but it was the complex intricacies of the relationships they shared with one another that captured my imagination. Their rivalries were expected, but the idea that the intensity of their competition waxed and waned on the unpredictable tides of political intrigue added an interesting and unexpected dimension to Jefferson's narrative.

On that note, I really liked how Jefferson painted Charles II. His penchant for beautiful woman and flagrant displays of infidelity would have made it easy to vilify him, but Jefferson opted to for a more dynamic interpretation, presenting him as a competent man, but wayward and rather self-indulgent. It is representation that echoes the conviction of John Evelyn who wrote his monarch was "a prince of many virtues and many great imperfections, debonair, easy of access, not bloody or cruel."

If Girl on the Golden Coin has a weakness, it is the lack of exposition offered the reader in regards to the political stage on which Frances' story unfolds. I can't speak for anyone else, but my formal education didn't cover the English Restoration. Independent study of the period has granted me a superficial understanding of events, but I am far from well-versed the era and that made Jefferson's work something of a challenge as she doesn't create a completely comprehensive portrait of England's political landscape under Charles II. The Stuarts are by no means unknown, but nor are they the Tudors. This being the case, I feel this piece would have benefited from additional bureaucratic commentary.

Decadent and sensuous, Girl on the Golden Coin is a delightfully vibrant story of devotion, honor, duty and fidelity. An impressive and enjoyable debut of an oft overlooked affair between an English king and the woman who so famously rejected him.

“I have something for you.” He turned me toward the looking glass and lowered a strand of diamonds. I watched our reflection as he fastened it behind my neck, allowing his fingers to graze my shoulders. He put his face beside mine, whispering, “And my love for all eternity.”