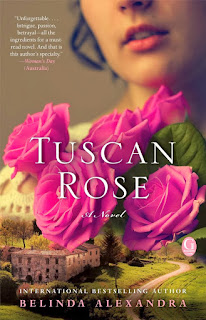 A magical, richly woven World War II– era saga filled with passion, secrets, beauty, and horror from internationally acclaimed bestselling author Belinda Alexandra. Florence, 1914. A mysterious stranger known as The Wolf leaves an infant with the sisters of Santo Spirito. A tiny silver key hidden in her wrappings is the one clue to the child’s identity.... Fifteen year later, young Rosa must leave the nuns, her only family, and become governess to the daughter of an aristocrat and his strange, frightening wife. Their house is elegant but cursed, and Rosa—blessed with gifts beyond her considerable musical talents—is torn between her desire to know the truth and her fear of its repercussions. All the while, the hand of Fascism curls around beautiful Italy, and no citizen is safe. Rosa faces unimaginable hardship: her only weapons her intelligence, intuition, and determination... and her extraordinary capacity for love.

I had a really difficult time with Belinda Alexandra's Tuscan Rose. I respect that a lot of other readers feel differently, but if I am entirely honest with myself I have to admit that I seriously considered throwing my kindle at the wall while reading this book. Be warned, there are possible spoilers ahead.

The first two parts of the story are held together by the barest of details. No joke, change Rosa's name and the circumstances of her arrest and you have two entirely different pieces. The magical powers that are so beautifully depicted in part one, disappear entirely in part two, along with most of the supporting cast. The sheltered orphan we knew is quite suddenly and without reason politically aware, confidant and entirely self-reliant. It just didn't make sense to me. I will grant, I found both portions appealing in their own right, but seeing them shoved together like this annoyed me to no end.

Part three ties up what seems to be a rats nest of loose ends, but by that point I felt it was too little too late and it didn't help that the solutions to the many mysteries in the novel - the identity of the Wolf, Rosa's parentage, the identity of the Falcon, Antonio's whereabouts, Orietta's fate, etc. and so on - were all entirely obvious. Alexandra failed to pitch even a single successful curve ball and I was rather disappointed by that considering how many she attempted to pull off over the course of the narrative.

Too much plot and not enough movement, disjointed and ultimately unsatisfying.

Ada chuckled. "All women are witches," she said, brushing her hands down her apron. "Only some of us are more aware of it than others."