The Prodigal Son by Anna Belfrage 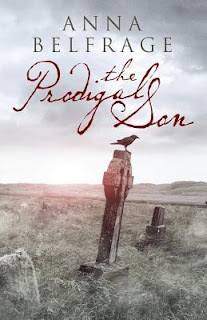 He risks everything for his faith - but will he be able to pay the price? Safely returned from an involuntary stay on a plantation in Virginia, Matthew Graham finds the Scottish Lowlands torn asunder by religious strife. His Restored Majesty, Charles II, requires all his subjects to swear fealty to him and the Church of England, riding roughshod over any opposition. In Ayrshire, people close ranks around their evicted Presbyterian ministers. But disobedience comes at a heavy price and Alex becomes increasingly more nervous as to what her Matthew is risking by his support of the clandestine ministers - foremost amongst them the charismatic Sandy Peden. Privately, Alex considers Sandy an enervating fanatic and all this religious fervour is totally incomprehensible to her. So when Matthew repeatedly sets his faith and ministers before his own safety he puts their marriage under severe strain. The situation is further complicated by the presence of Ian, the son Matthew was cruelly duped into disowning several years ago. Now Matthew wants Ian back and Alex isn't entirely sure this is a good thing. Things are brought to a head when Matthew places all their lives in the balance to save his dear preacher from the dragoons. How much is Matthew willing to risk? How much will he ultimately lose? The Prodigal Son is the third in Anna Belfrage's historical time slip series, which includes the titles The Rip in the Veil and Like Chaff in the Wind.

I've grown to love Anna Belfrage's work. The imaginative story she has created for Alexandra Lind and Matthew Graham is a joy to read, but her attention to detail and sense of history make her books truly special which is why I was so eager to read her latest release, The Prodigal Son.

The third installment of the Graham Saga focuses on the religious conflicts that marked the seventeenth century. As a result, there is significant focus on what constitutes religious and moral justice as well as what lengths one must go to uphold one's beliefs. While these questions fascinate me, they also illustrate Belfrage's talent for folding history into her narrative. You see, The Prodigal Son, indeed the entire Graham Saga, is at its heart about the life Alex and Matthew share, how despite all, it withstands the tempest of war and sway of political/theological upheaval. Belfrage never looses sight of that, carefully relating the larger story through the personalized experiences of her cast.

Speaking of Alex and Matthew, I have to commend Belfrage for her realistic of romantic affection and the intricacies of married life. These books simply wouldn't work if Alex and Matthew enjoyed a traditional happily ever after. Make no mistake, the two are deliriously happy with one another, but their life together isn't all sunshine and roses. They disagree, they argue, they test one another, and they don't always make up right away. In general I think there is a tendency to sugar coat reality in fiction, but I also feel there is much to be said for pragmatism, the idea that a real happy ever after requires patience, dedication and compromise.

This dedication to lifelike human emotion reaches to every member of Belfrage's cast, but is particularly evident when considering Ian and Alex. Perhaps it is because I can relate to him, having been in his shoes as a child, or because I could relate to her, as I walk in her shoes every day, but this relationship struck a huge chord in me. Yes, this is fiction, but Belfrage's profound understanding of the the human condition and sensitive representation of it in her novel is nothing short of extraordinary.

Reading The Graham Saga in order isn't necessarily required, but personally I'd recommend starting from the beginning. Each installment represents a stand alone chapter in Alex and Matthew's life together, but I think the relationships between her cast members are best appreciated when the reader has full knowledge of their individual histories. That being said, I greatly enjoyed The Prodigal Son and can't wait to see where life will take the Graham family next.

"You're a right bonny lad; one to be proud of, to love and to care for. And I would have dearly wished that you were mine, but you're not."