Six of One by Joann Spears 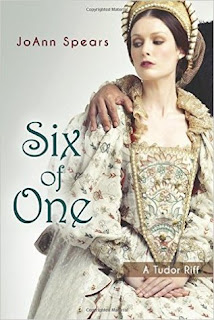 “Six of One” is the ultimate ‘girls’ night in’…with the six wives of Henry VIII. It’s the most fun you can have with your nightdress on! Join Dolly, the Tudor-obsessed heroine of “Six of One”, on a Yellow Brick Road journey to the alternate reality of an all-girl Tudor court. It all begins when Dolly loses consciousness on the eve of her marriage to the six-times- divorced Harry. She awakens in the company of the Tudor women she’s studied all her life. They have a mission to accomplish, and Dolly may be just the girl who can help them do it. As a warm-up to her life-changing interview with the six wives of Henry VIII, Dolly gets to dish with lots of the other fascinating females of the Tudor era. She learns things she never guessed about the Princes in the Tower from their sister, Elizabeth of York…Henry VIII’s mom. She talks sex with Henry’s sisters and scholarship with his daughters. She even gossips with the help, since Kat Ashley and Bess of Hardwicke are among the ladies on hand. Of course the heart of the story is in Dolly’s interview with the six wives of Henry VIII. It turns out there’s something to each of the wives’ stories that’s been held back all this time. You won’t believe what really happened…or will you? “Six of One” offers no tragedy, no excuses, and no apologies. It does have lots of broad humor, not to mention tons of puns. And—for a change—a happy ending.

What could be more fun than a henhouse visit with Henry VIII’s women? Admit it, you'd jump at the chance to get the dirt on Old Coppernose straight from the horse's mouth. Just the idea of rubbing elbows with everyone from his indomitable grandmother to his unfortunate great niece makes you giddy. It did me and despite my usual tendencies, I decided to take a chance with Joann Spears’ Six of One.

Looking back, I don’t hate the book, but Spears' humor and mine don't exactly jive. The piece is marketed as a riff, but I wasn't laughing. The cosmic connection between the bride-to-be and her collected confidants felt contrived rather than comical, Dolly's habitual rhyming reminded me of story time with my toddler, and the declarations of the deceased missed their mark.

I really don't mean to deter other readers or cause offense, but Six of One wasn’t my cuppa tea and I’d have difficulty recommending it to other readers.

The depth of human folly is unfathomable, Dolly. But we live, after our fashion, in hope.