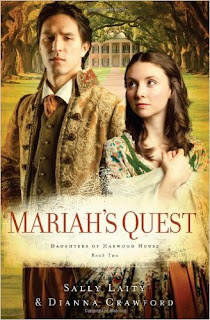 Bound to serve. . .longing to love. Mariah Harwood, one of three indentured sisters, stands on a Baltimore auction block in 1753. The dashing young gentleman who buys her just may be her ticket to marriage, wealth, and freedom. Once in Colin Barclay’s possession, Mariah grows to realize her pursuit won’t be as easy as she planned. Colin Barclay is as charming and rash as Mariah is reckless. He willingly outbids the other men for Mariah’s indenturement papers, but as he claims the grateful beauty, her overbearing sister dampens his anticipation by making him solemnly promise to deliver Mariah untouched to his family’s plantation. Undeterred, Colin welcomes the challenge of seducing Mariah—no strings attached. But best-laid plans soon go awry when Colin is wounded in battle. As he faces a world of bitterness, Mariah finds she needs more than charm to win his heart. Can she summon the inner beauty and faith to prove her love? 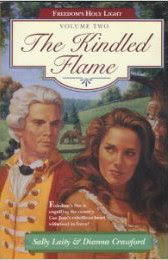 Fellow readers, I have turned a corner. For the first time, I am awarding Laity and Crawford less than four stars. I'm sorry ladies, I really am, but a generous three is all I can muster for Mariah's Quest. The book didn't pack the same punch as your previous collaborations. Consider this a warning folks, there be spoilers ahead.

Let's start with the blurb. Mariah is depicted as a scheming young woman with her eye on an advantageous marriage and freedom from her indentured status. I can agree with that, but the blurb also states "her pursuit wont be as easy as she planned." Huh? Where does that come from? Colin spends their first day together devising a means by which to keep her in his family home thereby increasing his access to the lady in question and limiting his competition for her affection. The single hurdle to their romance takes shape in the formidable mistress of the house, Cora Barclay, but we'll come back to her later. My point is the blurb offers a much overblown exaggeration of the situation.

The blurb also describes our heroine as "reckless." Again I find I am scratching my head. Colin and Mariah are alone for maybe two pages of the entire book and Mariah spends most of that ink worrying over her reputation. She frets over walking into the woods with Colin without an escort, nearly jumps out of her skin during their only real kiss and worries how their being alone in the Barclay home will be perceived by the neighbors. By definition, reckless means marked by a lack of proper caution or careless of the consequences. Mariah Harwood doesn't fit the mold, a borderline prude maybe, but certainly not reckless.

If Colin Barclay wasn't a fictional character I would encourage him to file a slander suit. The Barclay heir never actually tries to make Mariah his mistress. He privately flirts with the idea on a couple of occasions, but from the beginning he is half in love with the English rose. No joke, the two spend only a handful of private moments together before he proposes. Proposes friends. As in for better or worse, till death do us part, joined together in the eyes of God, holy matrimony. Doesn't sound much like a country playboy to me, but what do I know.

I'm already tiptoeing around the romance so I'll just say it. Laity and Crawford may have seen sparks flying, but I sure didn't. Colin is obviously interested in Mariah but the first time he leaves her side he goes prowling the local assembly with his cousin. He comes back to Mariah with a ring but it didn't seem like appropriate behavior for a besotted lover. Of course, Mariah isn't much better. She flirts with the attentions of various men in Colin's absence, most notably the Barclay's horse trainer. Maybe I am off base here, but the pair seem infatuated with rather than genuinely attached to one another.

Our lovers aren't the only two who seem to suffer from inconsistent characterization. Cora Barclay is right there with them. The Barclay matriarch comes out swinging, making it clear that any dalliance between Colin and Mariah will not be tolerated, not even if Mariah ends up with child. In 1753 that is nothing short of brass. Unfortunately, Cora soon loses her nerve, merely tolerating Mariah's presence and accepting her inability to remove the girl from the Barclay home and her son's affections. For the most part anyway. She makes a halfhearted attempt at shaming Mariah in front of the  Barclay peers and there is a lovely moment when she shouts her displeasure at Mariah's ineptitude as her son's mistress. Not to fear though, by the day of the wedding Cora is singing Mariah's praises from the hilltops. Can someone please explain to me where this character comes from? I don't get it. Unless she suffers from some sort of personality disorder. Then it all makes perfect sense.

Under usual circumstance, I praise Laity and Crawford for the skill in which they integrate history into their plots. Not this time. It takes half the book for the the characters to get into events in the Ohio River Valley and by the time we realize Colin, Tuck and Nate actually saw action, the battles are over and the wounded have returned home. Having waited two thirds of the novel for anything of historic significance to happen, I felt entirely cheated.

In my review of Rose's Pledge, I commented on what I felt to be recycled material. Mariah's Quest isn't as blatant as its predecessor, but it isn't without issue and does share certaion similarities with a character highlighted . Little Amy, the youngest of the Barclay clan, spends an inordinate amount of time in the stables among the horses and is less than thrilled with more feminine pursuits of the day. These are traits she shares with Emily Haynes of the Freedom's Holy Light series. Taking this into consideration I believe the Barclay and Haynes families would enjoy one another. Both have large land holdings, profit from the raising of horse flesh and neither mistress of the house is particularly impressed by their son's choice of indentured bride.

Was I impressed? Decidedly not. Do I regret reading the book? No, but I really expected a lot more from it. Will I read the third installment? Probably. I really want to believe that Mariah's Quest was a fluke accident, a rare misstep by two authors I genuinely appreciate.

Recommended to fans of The Midwife of Blue Ridge and the Freedom's Holy Light series.

Yes. In her quest for Colin, she'd be diligent. Extremely diligent. After all, as her instructress, Miss Simkins, loved to remind her, Rose, and Lily, "A man has no need to buy a cow if he can get the milk for free."