Time and Regret by M.K. Tod 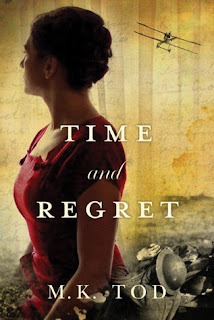 When Grace Hansen finds a box belonging to her beloved grandfather, she has no idea it holds the key to his past—and to long-buried family secrets. In the box are his World War I diaries and a cryptic note addressed to her. Determined to solve her grandfather’s puzzle, Grace follows his diary entries across towns and battle sites in northern France, where she becomes increasingly drawn to a charming French man—and suddenly aware that someone is following her... Through her grandfather’s vivid writing and Grace’s own travels, a picture emerges of a man very unlike the one who raised her: one who watched countless friends and loved ones die horrifically in battle; one who lived a life of regret. But her grandfather wasn’t the only one harboring secrets, and the more Grace learns about her family, the less she thinks she can trust them.

Time and Regret is M.K. Tod’s third novel. I’ve both of her earlier releases and was eyeing her latest long before it was made available for review. WWII is my usual stomping ground, but I find myself increasingly fascinated with the Great War and, as such, couldn’t help bumping Time and Regret to the top of my TBR when Lake Union Publishing granted my request for an ARC.

The book impressed me on a number of levels, but I was floored by Tod’s illustration of a woman trying to move forward after an unexpected divorce. By coincidence, I intimately understood a lot of Grace’s insecurities and I was both impressed and appreciative of the authenticity Tod managed to convey in her make-up. Trends favor young, confident women, but Tod chose to feature a woman with relatable life experience and I think her novel stronger for it.

Secrets buried in letters and diaries are war lit clichés, but I really liked how Tod used Martin’s service memoir in Time and Regret. The volume contains many surprising revelations about Martin’s experiences at the Front, but I felt the way he repurposed it to convey his final wishes to Grace gave interesting insight into both his character and the relationship he shared with his granddaughter. I am used to relatives discovering the letters and diaries after the fact, but I found Martin’s active role as ‘game master’ refreshingly engaging.

Cynthia was a difficult character for me, but I grew to appreciate her very deeply in the end. I’m not used to seeing grandmothers portrayed as difficult, but here again I found myself applauding Tod’s unconventional approach. She threw stereotypes out the window and created a very unique personality in Cynthia and I like how the revelations into her character led me to believe different things about her character at different points in the narrative.

The climax of the novel was entertaining in its way, but I felt the intensity and emotion faded in the final chapters. I don’t mean to sound critical, but I appreciated those elements more than the mystery surrounding the paintings and while I liked how the story ended, I would have favored a more emotive conclusion. That said I greatly enjoyed the time I spent with this piece and would definitely recommend it to my fellow readers.

If the newspapers reported the truth, if they wrote about the mud and filth and the body parts littering the ground and how young men look old before their time, would we still be here?

Many thanks for your review, Erin. I'm delighted to hear your thoughts about it and to know of how the characters affected you. Thanks also for the useful comment on the last chapters. I have to say, I found those some of the most difficult to structure!! Warm regards M.K. (Mary) Tod