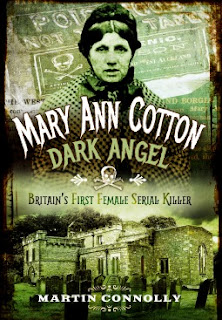 A female thief, with four husbands, a lover and, reportedly, over twelve children, is arrested and tried for the murder of her step-son in 1872, turning the small village of West Auckland in County Durham upside down. Other bodies are exhumed and when they are found to contain arsenic, she is suspected of their murder as well. The perpetrator, Mary Ann Cotton, was tried and found guilty and later hanged on 24 March 1873 in Durham Goal. It is claimed she murdered over twenty people and was the first female serial killer in England. With location photographs and a blow by blow account of the trial, this book challenges the claim that Mary Ann Cotton was the ‘The West Auckland Borgia’, a title given to her at the time. It sets out her life, trial, death and the aftermath and also questions the legal system used to convict her by looking at contemporary evidence from the time and offering another explanation for the deaths. The book also covers the lives of those left behind, including the daughter born to Mary Ann Cotton in Durham Goal.

*** NOTE: It should be understood that the title of this piece is somewhat misleading as Mary Ann Cotton was not Britain's First Female Serial Killer. For more information on her predecessors, please click here.

Mary Ann Cotton - Dark Angel Britain's First Female Serial Killer by Martin Connolly looked interesting from the start. I’m fascinated with true crime stories and female serial killers aren’t exactly common, so I requested an ARC and was pretty excited when a copy of the book landed in my inbox. Unfortunately, for me though, that enthusiasm was short lived.

In the introduction, Martin notes that he chose to write this biography/case study in response to queries he received after publishing The Potted History of West Auckland. He explains that Mary Ann’s story generated a lot of interest and he felt compelled to put together a more complete picture of her life. That’s great and quite generous in a way, but I think this admission has a lot to do with the difficulties I experienced while reading Connolly’s finished work.

I’d never heard of Mary Ann Cotton, but the author was catering to an audience who had and that disconnect impacted my experience. I didn’t understand the basics of the case and long story short, I found Connolly’s narration intensely difficult to navigate. The author jumps about the timeline on the assumption that his audience knows all the players, understands the crime, and has a general awareness of how events will unfold.

I ended up supplementing my reading with a fair amount of virtual research just to finish the book and found myself thinking the finished book more trouble than it’d been worth. The material is interesting, but I felt much of its power lost in the telling and would have difficulty recommending this one to all but ardent enthusiasts.

"I am convinced that my children were poisoned. I suspected it at the time, but I did not want my mind to dwell on the subject. They were healthy and strong, and only ill a few days before they died. Any time she gave them anything they vomited, and were sick and purged."