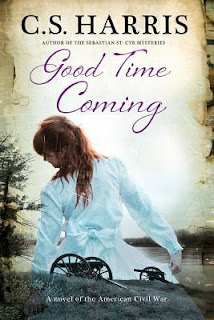 I killed a man the summer I turned thirteen... Thus begins C. S. Harris’s haunting, lyrically beautiful tale of coming of age in Civil War-torn Louisiana. Eleven-year-old Amrie St. Pierre is catching tadpoles with her friend Finn O’Reilly when the Federal fleet first steams up the Mississippi River in the spring of 1862. With the surrender of New Orleans, Amrie’s sleepy little village of St. Francisville – strategically located between the last river outposts of Vicksburg and Port Hudson – is now frighteningly vulnerable. As the roar of canons inches ever closer and food, shoes, and life-giving medicines become increasingly scarce, Amrie is forced to grow up fast. But it is her own fateful encounter with a tall, golden-haired Union captain named Gabriel that threatens to destroy everything and everyone she holds most dear. Told with rare compassion and insight, this is a gripping, heart-wrenching story of loss and survival; of the bonds that form amongst women and children left alone to face the hardships,depravations, and dangers of war; and of one unforgettable girl’s slow and painful recognition of the good and evil that exists within us all.

C.S. Harris’ Good Time Coming is an unapologetically graphic novel. It is an intense story that touches a number of controversial and deeply disturbing subjects. It incorporates moments that stopped me dead in my tracks and scenes that made me distinctly uncomfortable. It is also the most intricate, gutsy, and perceptive Civil War narrative I’ve had fortune come across.

Harris isn’t telling the story of the North or the South in these pages and she’s not preaching the evils of American slavery though all are shown to shape twelve-year-old Amrie’s understanding of the world. Harris’ thesis is much more personal and I feel her effort to explore the ways in which the women of the patriarchal South coped when ‘virtually every able-bodied male in their community marched off to war’ both poignant and profound.

Those who believe war crimes of the day were limited to the deprivation at Andersonville are in for an education with this piece. Harris’ work chronicles the realities of life for civilians caught in the crossfire of the war, the horrors they suffered, the questions they struggled to answer, and the skills they acquired to survive their circumstances. Harris’ research delves deeply into rape and sexual violence, but her investigation was obviously comprehensive and the book even includes casual references to incidents that unfolded outside St. Francisville, Louisiana such as Camp Douglas and the sacking of Columbia.

The women depicted in the novel are a diverse collection of individuals. They range in age and social status. Some are mothers, some are alone, some are widows, some are wives, some are white, some are black, some are both, some own slaves, and some do not. They have different interests and different views, but they are bound together by the brutality, chaos, and uncertainty they face. These characters are fictional, but the resolve and fortitude they exhibit is a testament to their real life counterparts and steel those women forged in the blood-soaked years of the war between the states.

I could go on about the admiration I feel for Harris’ characterizations of Amrie, Katherine, and Castile. I could write about how much I enjoyed the context and contrast afforded by characters like Horst, Mahalia, Fiona, Priebus, Leo, Bo. and Adelaide. I could write pages on my appreciation for the political dialogue, but I feel it best to allow the book to speak for itself on those points. Good Time Coming is the first Harris novel I picked up, but it certainly wont be the last and I can confidently say I’ll recommending this title several times over.

We lived in a vortex of mounting terror, of atrocity followed by atrocity, until a kind of numbness set in. I suppose the only way to cope with a world gone mad is to pretend that madness is normal. The problem is, when that happens, your world tilts, distorts. And I’m not sure you can ever make it right again.

That's it. Now I have to buy the book. EXCELLENT review, thank you!

Thanks guys! I really loved this one. :)