The Muralist by B.A. Shapiro 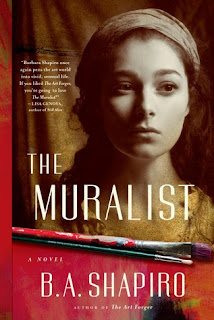 Alizée Benoit, an American painter working for the Works Progress Administration (WPA), vanishes in New York City in 1940 amid personal and political turmoil. No one knows what happened to her. Not her Jewish family living in German-occupied France. Not her artistic patron and political compatriot, Eleanor Roosevelt. Not her close-knit group of friends, including Mark Rothko, Jackson Pollock, and Lee Krasner. And, some seventy years later, not her great-niece, Danielle Abrams, who while working at Christie’s auction house uncovers enigmatic paintings hidden behind recently found works by those now famous Abstract Expressionist artists. Do they hold answers to the questions surrounding her missing aunt? Entwining the lives of both historical and fictional characters, and moving between the past and the present, The Muralist plunges readers into the divisiveness of prewar politics and the largely forgotten plight of European refugees refused entrance to the United States. It captures both the inner workings of today’s New York art scene and the beginnings of the vibrant and quintessentially American school of Abstract Expressionism. B.A. Shapiro is a master at telling a gripping story while exploring provocative themes. In Alizée and Danielle she has created two unforgettable women, artists both, who compel us to ask, What happens when luminous talent collides with inexorable historical forces? Does great art have the power to change the world? And to what lengths should a person go to thwart evil?

B.A. Shapiro’s The Muralist has occupied a spot on my TBR longer than I care to admit. The subject matter intrigued me and I have always been intrigued by the face on the cover, but the book never demanded my immediate attention. It wasn’t until recently, in an effort to clean up my review backlog, that I turned my eye to the narrative and borrowed an audio edition from my local library.

Before I get too far ahead of myself, I want to say that I loved Xe Sands’ narration. I listened to this volume on the heels of Donna Thorland’s The Turncoat and couldn’t believe the contrast. Madeleine Lambert butchered the latter volume while Sands enhanced former. There is passion in Sands’ interpretation and I felt the subtle artistry of her tones complimented the text very nicely.

As far as the story goes, I feel the novel has a lot going for it. Shapiro explores the foundations of abstract expressionism by associating Alizée with Lee Krasner, Jackson Pollock, and Mark Rothko and I found the chapters dedicated their art absolutely fascinating. I thought Shapiro’s illustration of the artist community brilliant and I liked the attention she paid both the creativity and neurosis that characterized their company.

I felt the story took a hard turn when Eleanor Roosevelt entered Alizée’s world and I'm not sure it was for the better. The two women seemed to share an unnaturally close bond and the relationship didn’t feel authentic in my eyes. I liked the idea of the Breckinridge Long plot line, but in looking at the novel as a whole I felt there was too much going on. Alizée’s art and her personal troubles were more than enough and I found supplementing it with a political intrigue overwhelming.

I was equally unimpressed with the modern story line. Dani Abrams bored me and the conclusion of her experiences seemed heavy-handed, melodramatic, and overly coincidental. Here again I felt Alizée’s story could have carried itself and I have no problem admitting that I didn’t have much appreciation for her downtrodden and hopelessly clichéd niece.

Historically speaking, I liked how Shapiro described New York and American views of the day, but I can’t say I was particularly moved or impressed with the scenes that played out in France. I don’t know why, but that setting never came alive for me and I couldn’t help feeling those chapters were dominated by fact dumps and long winded exposition.

In sum, I liked the book and enjoyed the ideas and thoughts it inspired. I can’t say it my all-time favorite read, but I would definitely recommend it to fellow readers, especially those with an interest in art history.

“You know,” Franklin said pointedly, “this is a Protestant country, and the Jews are here under sufferance. It’s my decision who gets visas and who doesn’t, and it’s up to the citizenry to go along with what I want.”