Begun by Time by Morgan O'Neill 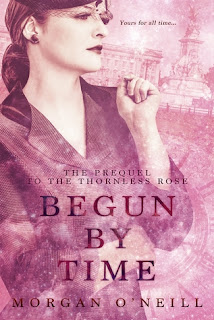 In 1945, a man disappeared into thin air... In the final days of World War II, Catherine Hastings meets the man she wants to marry. Flight surgeon Jonathan Brandon isn't just handsome - he's everything Catherine could hope for in her betrothed. But her dream of a happily ever after is shattered when Jonnie disappears shortly before their wedding... leaving Catherine bereft, broken-hearted, and with a lifetime of unanswered questions. Arthur Howard is smitten with the lovely Catherine the moment he sees her. He's certain he's found the woman he wants to marry. Yet behind Catherine's sparkling green eyes is a haunted look - the look of a woman who has known loss. But can he love a woman who still grieves the loss of her fiancé? Now Arthur wants answers about the man Catherine intended to marry. But the truth about Jonnie's disappearance is far stranger than fiction...

Yeah... no. Morgan O'Neill's Begun by Time didn't work for me. I've a penchant for WWII lit and jumped into the novel without thinking twice, but I made it only a few chapters before realizing I'd picked up something I wasn't going to enjoy.

My first issue was the characterizations or more accurately, the lack there of. Cookie cutter character drive me up the wall and there was simply no depth to Catherine, Jonathan or Arthur. They appeared to be going through the motions, but there was nothing genuine about their sentimentalities which made it incredibly difficult for me to buy into the relationships they were meant to experience.

My second issue was the structure of the novel. The story unfolds chronologically, but as a reader I found the presentation awkward. Why bother to illustrate the relationship between Catherine and Jonathan when you intend to rip them apart? It's a bloody waste of ink, especially since anyone who has read the blurb knows their wedding never takes place. Honestly, the book should have started with Arthur meeting Catherine and followed their relationship as he sought to unravel the mystery that haunts her heart.

Last, but not least, is the lack of historic detail. Begun by Time is an exceedingly light piece and that's well and good for those who appreciate vague references, but I favor meatier pieces with extensive worldbuilding and calling an end to the greatest conflict of the twentieth century with little more than "It is unconfirmed as yet, and there are no details, but Germany announced late last night that Hitler is dead" didn’t pack the punch I was looking for.

I’d no real interest in reading The Thornless Rose prior to picking up its prequel, but I’m definitely not interested now and can’t say I see myself recommending Begun by Time to my fellow readers.

Time. She suddenly realized how it had affected her, how her journey with Arthur was begun by time itself. Begun by time. Yes. And always meant to be.