Promised to the Crown by Aimie K. Runyan 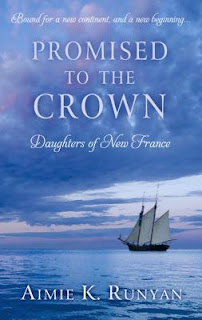 In her illuminating debut novel, Aimie K. Runyan masterfully blends fact and fiction to explore the founding of New France through the experiences of three young women who, in 1667, answer Louis XIV’s call and journey to the Canadian colony. They are known as the filles du roi, or “King’s Daughters”—young women who leave prosperous France for an uncertain future across the Atlantic. Their duty is to marry and bring forth a new generation of loyal citizens. Each prospective bride has her reason for leaving—poverty, family rejection, a broken engagement. Despite their different backgrounds, Rose, Nicole, and Elisabeth all believe that marriage to a stranger is their best, perhaps only, chance of happiness. Once in Quebec, Elisabeth quickly accepts baker Gilbert Beaumont, who wants a business partner as well as a wife. Nicole, a farmer’s daughter from Rouen, marries a charming officer who promises comfort and security. Scarred by her traumatic past, Rose decides to take holy vows rather than marry. Yet no matter how carefully she chooses, each will be tested by hardship and heartbreaking loss—and sustained by the strength found in their uncommon friendship, and the precarious freedom offered by their new home.

Aimie K. Runyan's Promised to the Crown intrigued me. I haven't read a lot of fiction set in Canada and while I was aware it'd been a French colony, I'd never heard of the "King's Daughters" and wasn't entirely sure what to expect from the narrative. I took time to consider the book, but it stayed on my radar as reviews came in, my curiosity grew, and eventually got the best of me.

Runyan's fiction introduced me to material I knew absolutely nothing about, but I found the way she conveyed that history quite creative. Most stories end when the characters reach their destination, but arrival in the colony is only the beginning for Rose, Nicole, and Elisabeth. Maybe it's just me, but I felt there was very authentic in that, something very true to the experiences of the real King's Daughters and I appreciated how Runyan incorporated that reality into her fiction.

Taking that concept one step further, I loved the diversity in each of the three story lines. Each woman faces a very different set of challenges and while I thought some moments a little soft, I was drawn to the idea that so much of their struggle was not tied to the era so much as it was their emotions. Runyan captured a number of intimate moments over the course of the narrative and I think that the universality of the pain and joy these women experience bridges the gap and allows modern readers to really understand the world through their eyes.

Runyan tackles a lot of social and legal conflicts as well as personal drama so don't get the idea that its all women's issues. The author obviously loves the period and I think the finished novel speaks to era and I'm eager to see where the author takes the series in book two of the series, Duty to the Crown, which is set to release in October.

Rose walked slowly back to her dormitory. She hoped that Sister Charite was right, and that a useful life awaited her in New France.