The Last Casualty by Andrew Leatham 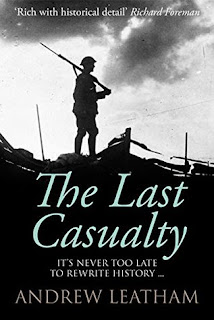 Belgium, 1917. Wilf joined up at seventeen, wanting to do his bit. But now he is broken by the death and human agony surrounding him. The smell of the rotting corpses, the vermin gnawing on the corpses in No Mans Land, has all been too much. After a brief period of R and R, he knows he cannot return to the line, but off he is sent. When his courage falters, he’s charged with cowardice, court martialled, and shot at dawn. Lancashire England, 1995. Joanne Neally’s grandmother has died. While cleaning out her house, she finds the telegram that informed her family of the death of her great grandfather, simple and unpunctuated: Regret to inform you Private 792163 Isherwood Wilfred 3rd Batt Pennine Fusiliers died of gunshot wounds Ypres August 22 1917. Joanne is moved to tears by the telegram, but it is the diary she finds next that will change her life forever, for Wilf Isherwood detailed his experiences at Passchendaele, one of the fiercest and bloodiest battles of the Great War. A battle that cost the lives of half a million men, and changed the landscape of Belgium forever. Joanne, who is in an unhappy marriage, decides to clear Wilf’s name. It is obvious he was suffering from shell shock, and a pardon is in order. As she enlists help from the local legion, she discovers a man at a care home who knew her great grandfather. The more he tells her about the horrors they saw, the more determined Joanne is to clear Wilf’s name. But as her job and her marriage fall apart, everyone around her wonders about her loyalty to a man she never met, and how much she is willing to pay to clear his name.

I'm not known for mincing my words so if you don't appreciate critical commentary take the hint and jump ship now. I read negative reviews, I write negative reviews, and I am not ashamed of it. You're not required to agree with my stance nor my assessment of the novel in question, but I'm allowed an opinion just the same so you'll just have to deal the fact that this review actually exists. Don't like it? Don't read it. It's no skin off my nose one way or the other.

Without further ado or disclaimer, I want to say that Andrew Leatham's The Last Casualty wasn't my cuppa tea and I would find the novel impossible to recommend. The historic subject matter boasts natural intrigue, but the fictional elements felt carelessly constructed, incomplete, and underdeveloped. Consider yourselves warned folks, there are spoilers ahead.

The Shot at Dawn campaign is remarkable in and of itself, but Leatham's protagonist has virtually nothing to do with the movement. Joanne makes contact with the member of the group, but Leatham fails to develop that relationship and takes the story in an entirely different direction. There is a footnote at the end of the narrative about the success of the campaign, but the actual push for the posthumorous pardon of war victims is otherwise absent from the telling.

Joanne's deterioration, if that is in fact what Leatham was trying to illustrate, is ambiguous at best and I couldn't decide if she was a rational character trying to clear her grandfather's name or an irrational character that suffered the effects of battle fatigue without having actual experience of it. Wilf has moments, but his story is pretty cut and dry. Joanne's husband Frank is easily the most interesting character in the narrative, but he is never fully explored and his vacillating love/hate relationship with his wife proved both contradictory and confounding.

The nail in the coffin, however, is how Leatham closed the story. The author's conclusion is inconclusive and leaves the reader questioning the purpose of the narrative. Joanne does not fail in her quest, but she doesn't succeed in it either. It actually feels as if she loses her damned mind before she even gets her feet on the ground, but that's just me. I wish I were joking when I say that I finished the book and checked to make sure my ARC had downloaded properly, but I'm not. The main story line doesn't go anywhere and unlike my fellow reviewers, I refuse to excuse that reality out of admiration for the history involved.

I think the content great, but to be perfectly honest, I've seen it before and I've seen it done better. If you're that interested, save yourself the trouble and track down a copy of The Lost Soldier by Diney Costeloe or Barbed Wire and Roses by Peter Yeldham and call it a day. Leatham's idea had merit, but his execution leaves much to be desired and struck me as a total and complete disappointment.

He took Wilf by the left elbow and guided him steadily out of the cell where two more armed men from the regiment took up station in front. The party marched quickly along a short corridor, Tubby Clayton following behind, praying loudly. But no one was listening.