Fates and Traitors by Jennifer Chiaverini 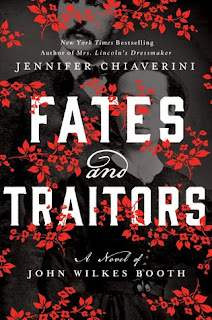 The New York Times bestselling author of Mrs. Lincoln’s Dressmaker returns with a riveting work of historical fiction following the notorious John Wilkes Booth and the four women who kept his perilous confidence. John Wilkes Booth, the mercurial son of an acclaimed British stage actor and a Covent Garden flower girl, committed one of the most notorious acts in American history—the assassination of President Abraham Lincoln. The subject of more than a century of scholarship, speculation, and even obsession, Booth is often portrayed as a shadowy figure, a violent loner whose single murderous act made him the most hated man in America. Lost to history until now is the story of the four women whom he loved and who loved him in return: Mary Ann, the steadfast matriarch of the Booth family; Asia, his loyal sister and confidante; Lucy Lambert Hale, the senator’s daughter who adored Booth yet tragically misunderstood the intensity of his wrath; and Mary Surratt, the Confederate widow entrusted with the secrets of his vengeful plot. Fates and Traitors brings to life pivotal actors—some willing, others unwitting—who made an indelible mark on the history of our nation. Chiaverini portrays not just a soul in turmoil but a country at the precipice of immense change.

I’ve grown rather wary of dedicating my time and energy to novels by Jennifer Chiaverini. I mean no offense to either the author or her fan base, but I found both The Spymistress and Mrs. Lincoln Rival one-sided and unintuitive. I believe that looking at history from a number of angles has value regardless of who was right and who was wrong and my experience with Chiaverini’s style and tone left me in doubt of her ability to scrutinize the Union and Confederate causes in equal measure. I respect that there are readers out there who appreciate Chiaverini’s brand of storytelling and I am genuinely thrilled that they enjoy her work, but as a matter of personal taste, I resolved to steer clear. That is, until I stumbled over a copy of Fates and Traitors.

I’ve studied John Wilkes Booth in the past and there is no shortage of fiction dedicated to his heinous crime, but this volume was different. From the description, I knew the novel was actually about Mary Ann Holmes, Asia Booth, Lucy Lambert Hale, and Mary Surratt, but Booth was the obvious center of the novel and I couldn’t help wondering if this was the volume that would change my opinion of Chiaverini. I’m not above admitting that authors have surprised me in the past and I actually love seeing writers grow and develop so after some serious consideration, I determined to break my rule and set out to discover if needed to order myself a heaping helping of humble pie.

At two stars, there should be no question as to how I ultimately felt about the narrative, but I think it important to note that despite my general disappointment, there were elements of the story that I actually liked. The prologue was written from John’s perspective and I actually felt it the strongest chapter of the entire novel. Chiaverini’s exploration of Booth and his emotions in his final hours left me in absolute awe. I was blown away and honestly wish she’d dropped the woman entirely and spent the whole of the narrative following Booth’s relationships from Booth’s point of view. I also grew a certain appreciation for Lucy. Her relationship with John was the most authentic and relevant of the novel and I enjoyed the ideas and themes that Chiaverini presented in her chapters of the narrative.

That said, I was intensely disappointed with Chiaverini’s representation of both Mary Ann and Asia. Neither are shown to have had a particularly deep relationship with John and I couldn’t help feeling their stories superfluous. Most of their interactions with Booth take place at a distance and I honestly wish Chiaverini had left well enough alone and cut them entirely. Mary Surratt served as another weak point in the narrative thanks to her stereotypic and superficial characterization, but my feelings about both Asia and Mary were compounded by how Dutton Publishing marketed their inclusion in the narrative. Contrary to what the cover purports, Chiaverini’s subjects are not lost to history. I’ll grant that Booth’s Sister by Jane Singer was a disappointment and is virtually unknown, but Susan Higgenbotham’s Hanging Mary was well-publicized at the Historical Novel Society Conference in Denver in 2015 and released to the wider market a full six months ahead of Fates and Traitors. Robert Redford also directed a film about Mary in 2010 that starred Robin Wright and James McAvoy, but I suppose those names don’t ring any bells for whoever penned the lie memorialized in this jacket description.

When all is said and done, I felt Fates and Traitors unbalanced. The fact that that women were not equal influences in John’s life made it difficult for me to appreciate their inclusion in the narrative and I maintain the book would have been much stronger if it was written from Booth’s point of view. Despite my appreciation for Lucy, I thought the strongest conflict of the novel was the rivalry that existed between Edwin and John and unfortunately, that relationship was not one that could explored with any degree of depth by the women who existed in its shadow. The women themselves live largely independent lives and without Booth have no real connection or historic importance which left me questioning what the author was trying to get at when drafting this manuscript.

Let history decide what to make of the misguided, vengeful man who had killed a great and noble president. That was not the man she had known and loved. She had already said all she ever intended to say about the assassin John Wilkes Booth.

Thanks for the honest review; I found the one novel of hers that I read to be very one-sided and flat, and so far, haven't seen anything to convince me otherwise. :/

"I’ve grown rather wary of dedicating my time and energy to novels by Jennifer Chiaverini."

Oh my goodness. Someone finally said it. I enjoyed her Quilting series until she decided that every single character in every single book needed their own book. When she branched out, I thought, "Fantastic!" and then I was so disappointed when I read "Mrs. Lincoln's Dressmaker". I won't read her anymore.