The Vow by Felicity Goodrich 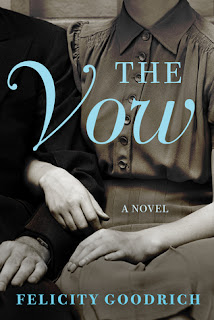 It happens in the chill of a September night, 1939: Their small Polish village is raided, burned to the ground. Anna, a devoutly Catholic teenager, watches as her friend is shot, as her father is dragged off for conscription in the German army. Szymon, the young village priest, stands silently with his parishioners as their church is ransacked and torched. Anna clings to him—her dear friend and confidant—and by some luck, the Germans spare them. Five Septembers later, Anna and Szymon still cling together, now amid the turmoil of war. Though Anna dreads her engagement to a local ruffian and Szymon fears for his father’s life back home, the two find solace in their friendship. But when the Soviet army comes to “liberate” them, Anna endures an unspeakable atrocity and Szymon suffers his own tragedy. Now bound even more tightly by the sorrows they carry, they face a choice: honor the vows they’ve made to others or risk everything for the chance at salvation in each other.

My interest in Felicity Goodrich’s The Vow stems from the time and location in which the story unfolds. I love WWII fiction and was instantly drawn to the narrative. Lake Union Publishing provided me a copy through Netgalley, but unfortunately, the book didn’t deliver the punch I’d been hoping for when I submitted my initial request.

Goodrich sets an intense tone in the opening chapters of the narrative, but she doesn’t sustain the momentum through to the end. I finished the book, but I had to fight off boredom the last sixty pages and was not at all satisfied the novel’s resolution. It doesn’t seem to have bothered other readers, but suffice it to say the conclusion was too predictable and tidy for my liking.

Anna and Szymon have their moments and while I appreciated the challenges of Szymon’s holy responsibilities, both leads struck me as cookie-cutter characterizations. If not for Tomek, I’d have likely given up on the story altogether. Of the entire cast, the war profiteer was the only one with a truly compelling arc. I will not ruin the story by getting into the details, but I think his journey the most thought-provoking of the narrative.

I enjoyed the suspicions and jealousies that pit neighbor against neighbor within these pages, but I can't claim The Vow had a particularly profound impact on me as a reader.

Turning toward Anna, he took one last look at her. There would never be another girl like her in his life, and he knew it. He wanted to hold her one last time, to feel her kiss him the way she had in the church…

Thanks for the review..gives me a bit more insight on whether I will read it or not!