The Swans of Fifth Avenue by Melanie Benjamin 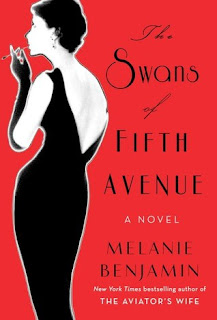 The New York Times bestselling author of The Aviator’s Wife returns with a triumphant new novel about New York’s “Swans” of the 1950s—and the scandalous, headline-making, and enthralling friendship between literary legend Truman Capote and peerless socialite Babe Paley. Of all the glamorous stars of New York high society, none blazes brighter than Babe Paley. Her flawless face regularly graces the pages of Vogue, and she is celebrated and adored for her ineffable style and exquisite taste, especially among her friends—the alluring socialite Swans Slim Keith, C. Z. Guest, Gloria Guinness, and Pamela Churchill. By all appearances, Babe has it all: money, beauty, glamour, jewels, influential friends, a high-profile husband, and gorgeous homes. But beneath this elegantly composed exterior dwells a passionate woman—a woman desperately longing for true love and connection. Enter Truman Capote. This diminutive golden-haired genius with a larger-than-life personality explodes onto the scene, setting Babe and her circle of Swans aflutter. Through Babe, Truman gains an unlikely entrée into the enviable lives of Manhattan’s elite, along with unparalleled access to the scandal and gossip of Babe’s powerful circle. Sure of the loyalty of the man she calls “True Heart,” Babe never imagines the destruction Truman will leave in his wake. But once a storyteller, always a storyteller—even when the stories aren’t his to tell. Truman’s fame is at its peak when such notable celebrities as Frank and Mia Sinatra, Lauren Bacall, and Rose Kennedy converge on his glittering Black and White Ball. But all too soon, he’ll ignite a literary scandal whose repercussions echo through the years. The Swans of Fifth Avenue will seduce and startle readers as it opens the door onto one of America’s most sumptuous eras.

The Swans of Fifth Avenue wasn’t a title I’d planned on reading. I recognized Truman Capote’s name in the jacket description, but I’d never heard of Babe Paley and generally speaking, I don’t have much regard for the scandal and drama of New York’s social elite. If I’m entirely honest, I wouldn’t have given the book a second thought if it had been written by anyone else, but Melanie Benjamin has been on my short list of favorite authors since I read The Aviator’s Wife and it’s simply not in me to overlook the work of those who’ve impressed me in the past.

I loved the style and tone of this piece. I think Benjamin did some really interesting things with the narrative and I liked how her characterizations highlighted the depth and personality of Capote’s Swans. I came to novel with stereotypic ideas of who these women might be and I appreciated how Benjamin’s treatment eclipsed those assumptions. I found Benjamin’s interpretation of Capote equally illuminating, but the circumstances of the story made him more challenging to appreciate. I felt genuine sympathy for the circumstances he faced, but his selfishness and disregard tempered the compassion and empathy I extended his character as the story progressed.

Despite myself, I was also captivated by the themes Benjamin wove into the fabric of the narrative. Maybe it’s me, but I liked the idea that the paragons who exemplified American life and style felt trapped and enslaved by the expectations associated with their status and reputation. Truman is outside their circle, but he suffers a comparative struggle in his effort to duplicate the success of In Cold Blood and I adored how Benjamin used those emotions to explore the isolation and insecurities these individuals might have experienced I real life.

The unconventional love story that takes place between Capote and Paley is also noteworthy. It is not a typical romance, but there is something remarkably intimate in Benjamin’s adaptation of their friendship. The connection exudes a familiarity and companionship that few physically involved leads can rival and I liked how Benjamin embraced their version of affection and used her novel as a platform to explore their emotional affair.

The novel’s pacing left something to be desired, but I ultimately enjoyed the story much more than I expected to. It is a shamelessly catty narrative, but I found the sophistication, vulnerability, and glamour depicted in The Swans of Fifth Avenue undeniably compelling and would definitely recommend it to fellow readers.

Slim finally lit the blessed, blessed cigarette and took a long draw. She leaned back in her chair and exhaled, narrowing her eyes at Pamela. Strange, how Truman could bring them together, how he’d made allies out of enemies with his pen.